We are OPEN and SHIPPING - click here for shipping estimates
PRE-SUMMER CYBER SALE EXTENDED thru 6/1 ~ Over 2,500 items up to 90% off
An Amish Quilt
By: Beth Wiseman 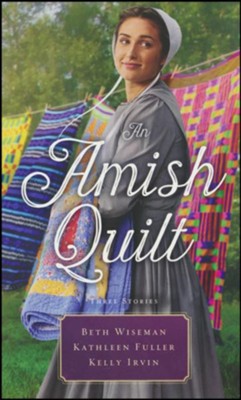 ▼▲
Eli Byler has been a widower for two years when he chooses to make a fresh start in Paradise, Pennsylvania. As Eli juggles the admiration of two women, he meets Miriam Fisher-the most unconventional Amish woman he's ever met. She doesn't fit the mold for what Eli is looking for, but it isn't long before Eli realizes that Miriam is everything he wants. But Miriam has no plans to get married-ever. Will Eli be able to change her mind?

Eli Byler has been a widower for two years when he chooses to make a fresh start in Paradise, Pennsylvania. As Eli juggles the admiration of two women, he meets Miriam Fisher—the most unconventional Amish woman he’s ever met. She doesn’t fit the mold for what Eli is looking for, but it isn’t long before Eli realizes that Miriam is everything he wants. But Miriam has no plans to get married—ever. Will Eli be able to change her mind?

Every week, Hannah Lynne brings her home-churned butter to the local market. And every week Ezra stops by to purchase some. Hannah Lynne knows not to read too much into it—Ezra is a confirmed bachelor and barely even glances her way, despite any hope to the contrary. But when Ezra bids an exorbitant amount to win the quilt she had her heart set on, Hannah Lynne can’t stop her heart from taking over her mind. Could Ezra finally be in the market for love?

Iris Beachy serves as a midwife in her district where she longs for a family of her own. When her friend’s brother Mahon Kurtz seeks her help in delivering the baby of two young teenagers who have sought refuge in their town, they begin to see each other in a different light. Unprepared for parenthood, the young couple leave their baby girl behind in an antique crib quilt resembling the one destined for Iris when she becomes a mother. Mahon and Iris come together to take care of the baby as they try to find her parents, and they begin to see new possibilities for their future.

Kelly Irvin is the bestselling author of the Every Amish Season and Amish of Bee County series. The Beekeeper’s Son received a starred review from Publishers Weekly, who called it a "beautifully woven masterpiece." The two-time Carol Award finalist is a former newspaper reporter and retired public relations professional. Kelly lives in Texas with her husband, photographer Tim Irvin. They have two children, three grandchildren, and two cats. In her spare time, she likes to read books by her favorite authors. Visit her online at KellyIrvin.com; Instagram: kelly_irvin; Facebook: Kelly.Irvin.Author; Twitter: @Kelly_S_Irvin.

▼▲
I'm the author/artist and I want to review An Amish Quilt.
Back
×
Back
×