Skip to main content
SPRING CYBER EVENT STARTS NOW: And it's a really BIG deal! Up to 88% off through 5/24>
An Amish Love - eBook
By: Beth Wiseman, Kathleen Fuller, Kelly Long
Stock No: WW24240EB 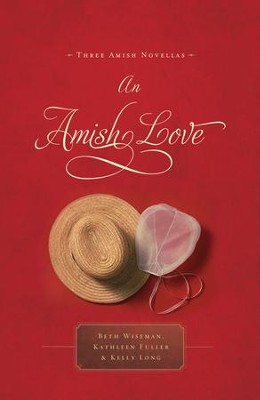 ▼▲
Healing Hearts by Beth Wiseman: Levina Lapp and her husband Naaman are alone for the first time in 30 years. When Naaman left to visit cousins in Ohio, Levina wasn't expecting him to be gone a year. Now that he's back, will they be able to move beyond this estrangement and fall in love again?

: A tragic accident rocks a peaceful Amish community, leaving Ellie Chupp blinded and Christopher Bender's future shattered. But they find love and forgiveness in a place they least expect.

A Marriage of the Heart by Kelly Long: Rachel Yoder is tired of her Amish lifestyle and her domineering father's ways. When handsome Joseph Lambert comes back from the Englisch, she lies to force a marriage of convenience, providing the perfect means to escape her father's rule. But Rachel never imagined she'd fall in love with Joseph so quickly or irrevocably.

Romance is in the air, old-fashioned courtship is alive and well, and love is an eternal promise.

He left to find himself. She found her way without him. Now Levina and Naaman Lapp are together again, feeling miles apart. Although coming home was the right thing to do, Naaman must regain the trust and respect of his wife who, in his absence, has learned to trust God like never before. Could it be that their prior years together have simply been a preface to a greater love than they have ever known?

A Marriage of the Heart by Kelly Long

Abigail Kauffman is looking for a way out; Joseph Lambert is seeking a way in. Since her mother's death, Abby has lived alone with her father and longs to escape the emptiness of the farmhouse that has never felt like home. Joseph Lambert is a newcomer in their close-knit community. Only after they find themselves suddenly married to each other do they begin to understand the tender truths of life-long love.

When Ellie Chupp loses her sight in an accident--and then her boyfriend shortly after that--she believes love will never be in her future. But Christopher Miller has returned home, five years after fleeing from the tragedy that broke his heart. When Ellie and Chris meet again, sparks fly. Could true love be a matter of seeing with new eyes?

Bestselling and award-winning author Beth Wiseman has sold over two million books. She is the recipient of the coveted Holt Medallion, a two-time Carol Award winner, and has won the Inspirational Reader's Choice Award three times. Her books have been on various bestseller lists, including CBA, ECPA, Christian Book, and Publishers Weekly. Beth and her husband are empty nesters enjoying country life in south central Texas. Visit her online at bethwiseman.com; Facebook: @AuthorBethWiseman; Twitter: @BethWiseman; Instagram: @bethwisemanauthor.

▼▲
4 stars - Three of the top authors in Christian literature collaborate on these three Amish-themed novellas. Characters overlap in the stories, which brings unity to the book. These heartwarming tales focus on finding oneself and finding love.

▼▲
Three novellas in one book provide variations on the Amish theme. Each stands alone, though characters overlap as three couples search for love. In "A Marriage of the Heart," Abigail Kauffman forces her marriage to Joseph Lambert, a man struggling with his past in the Englisch world. They forge a tentative relationship, but both their pasts may be their undoing. Ellie Chupp, a blind Amish woman in "What the Heart Sees," must face Christopher Miller when he returns to his Amish roots seeking forgiveness for his part in causing Ellie's blindness. But can he forgive himself? One strong woman leads the way. Finally, in "Healing Hearts," Naaman Lapp returns home after a year away to find Levina, his wife of 31 years, distrustful and confused. Naaman woos her as he struggles to make amends with his children. But a mysterious man comes looking for Naaman and rumors begin to fly. Occasional dragging plot lines won't damage the book's selling power. (Dec.) Copyright 2010 Reed Business Information.

▼▲
I'm the author/artist and I want to review An Amish Love - eBook.
Back
Back