Skip to main content
SPRING CYBER EVENT STARTS NOW: And it's a really BIG deal! Up to 88% off through 5/24>
An American Son: A Memoir - eBook
By: Marco Rubio
Stock No: WW48045EB 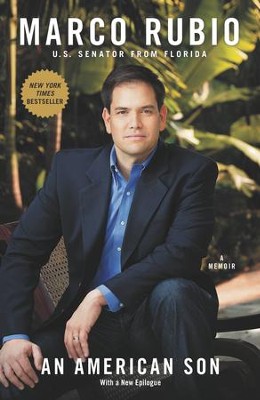 An American Son: A Memoir - eBook

▼▲
Few politicians have risen to national prominence as quickly as Marco Rubio. Here is the full story of his unlikely journey.

Florida Senator Marco Rubio electrified the 2012 Republican National Con­vention by telling the story of his parents, who were struggling immigrants from Cuba. They embraced their new country and taught their children to appreciate its unique opportunities. Every sacrifice they made over the years, as they worked hard at blue-collar jobs in Miami and Las Vegas, was for their children.

Young Marco grew up dreaming about football, not politics. In this fas­cinating memoir, he reveals how he ended up running for the West Miami City Commission, and then the Florida House of Representatives. In just six years he rose to Speaker of the Florida House. He then won his U.S. Senate campaign as an extreme long shot.

Now Rubio speaks on the national stage about the better future that’s possible if we return to our founding principles. In that vision, as in his fam­ily’s story, Rubio proves that the American Dream is still alive for those who pursue it.

▼▲
MARCO RUBIO served in the Florida House of Representatives from 2000 to 2008 and was elected to the U.S. Senate in 2010. His committee assignments currently include Commerce, Science and Transportation; Foreign Relations; intelligence; and Small Business and Entrepreneurship. He and his wife, Jeanette, have four young children and live in West Miami. His new book is American Dreams: Restoring Economic Opportunity for Everyone.

▼▲
"What people hate most about politicians is how phony many of them can be. Sen. Marco Rubio’s new book, An American Son, shows he is anything but."
– Ron Kessler, Newsmax

"His success is an affirmation of the sacrifices members of his parents' generation made so that their children could have the opportunity to achieve the American Dream."
-Kirkus Reviews

"This is a classic of its genre."
-Gillian Tett, Financial Times

▼▲
I'm the author/artist and I want to review An American Son: A Memoir - eBook.
Back
Back