Skip to main content
An American Family: The Buckleys - eBook
By: Reid Buckley
Stock No: WW8985EB 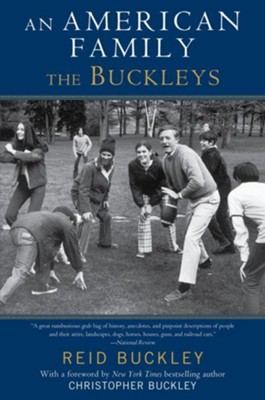 An American Family: The Buckleys - eBook

The Buckley name is synonymous with a unique brand of conservatism -- marked by merciless reasoning, wit, good humor, and strong will. Self-made oil tycoon William F. Buckley, Sr., of Texas, and his Southern belle wife, Aloise Steiner Buckley, of New Orleans, raised a family of ten whose ideals would go on to shape the traditionalist revival in American culture.

But their family history is anything but conventional. Begun in Mexico (until their father was expelled) and set against a diverse inter-national background (the children's first languages were Spanish and French) with colorful guest stars (such as Pancho Villa, and Norman Mailer), theirs was a life built on self-reliance, hard work, belief in God, and respect for all. It is no wonder the family produced nationally recognizable figures such as columnist and commentator William, Jr., New York Times bestselling satirist Christopher, and New York senator James.

With charm and candor, youngest son Reid, himself the founder of the Buckley School of Public Speaking in South Carolina, tells the enormously engaging and entertaining -- sometimes outrageous -- story of a family that became the mainstay of right-wing belief in our politics and culture. An American Family is an epic memoir that at once will appeal to conservatives, liberals, and moderates alike.

▼▲
Reid Buckley, founder and head of the Buckley School of Public Speaking, graduated from Yale. During the 1960s and 1970s, he toured the United States, taking on liberal columnist Max Lerner. He is the author of the novels The Eye of the Hurricane, and the fiction trilogy Canticle of the Thrush, Servants and Their Masters, as well as several books on speaking and writing. He has also written for The New York Times, The Atlantic, and The National Review. He lives in South Carolina. Christopher Buckley is a novelist, essayist, humorist, critic, magazine editor and memoirist. His books have been translated into sixteen foreign languages. He worked as a merchant seaman and White House speechwriter. He has written for many newspapers and magazines and has lectured in over seventy cities around the world. He was awarded the Thurber Prize for American Humor and the Washington Irving Medal for Literary Excellence.

▼▲
I'm the author/artist and I want to review An American Family: The Buckleys - eBook.
Back
Back