Skip to main content
Amos: Hermeneia, a Critical and Historical Commentary on the Bible
By: Shalom Paul
Stock No: WW60234 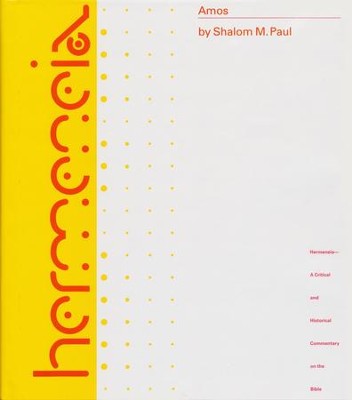 Amos: Hermeneia, a Critical and Historical Commentary on the Bible

▼▲
About the Hermeneia SeriesThe name Hermeneia, Greek, has a rich background in the history of biblical interpretation as a term used in the ancient Greek-speaking world for the detailed, systematic exposition of a scriptural work. It is hoped that the series, like its name, will carry forward this old and venerable tradition. A second, entirely practical reason for selecting the name lies in the desire to avoid a long descriptive title and its inevitable acronym, or worse, an unpronounceable abbreviation.The series is designed to be a critical and historical commentary to the Bible without arbitrary limits in size or scope. It will utilize the full range of philological and historical tools, including textual criticism (often slighted in modern commentaries), the methods of the history of tradition (including genre and prosodic analysis), and the history of religion.Hermeneia is designed for the serious student of the Bible. It will make full use of ancient Semitic and classical languages; at the same time, English translations of all comparative materials-Greek, Latin, Canaanite, or Akkadian-will be supplied alongside the citation of the source in its original language. Insofar as possible, the aim is to provide the student or scholar with full critical discussion of each problem of interpretation and with the primary data upon which the discussion is based.Hermeneia is designed to be international and interconfessional in the selection of authors; its editorial boards were formed with this end in view. Occasionally the series will offer translations of distinguish commentaries which originally appeared in languages other than English. Published volumes of the series will be revised continually, and eventually, new commentaries will replace older works in order to preserve the currency of the series. Commentaries are also being assigned for important literary works in the categories of apocryphal and pseudepigraphical works relating to the Old and New Testaments, including some of Essene or Gnostic authorship.The editors of Hermeneia impose no systematic-theological perspective upon the series (directly, or indirectly by selection of authors). It is expected that authors will struggle to lay bare the ancient meaning of a biblical work or pericope. In this way the text's human relevance should become transparent, as is always the case in competent historical discourse. However, the series eschews for itself homiletical translation of the Bible.The editors are heavily indebted to Fortress Press for its energy and courage in taking up an expensive, long-term project, the rewards of which will accrue chiefly to the field of biblical scholarship.

Makes extensive use of ancient Near Eastern sources, and employs medieval Jewish exegesis along with modern Israeli biblical scholarship.

▼▲
I'm the author/artist and I want to review Amos: Hermeneia, a Critical and Historical Commentary on the Bible.
Back
Back