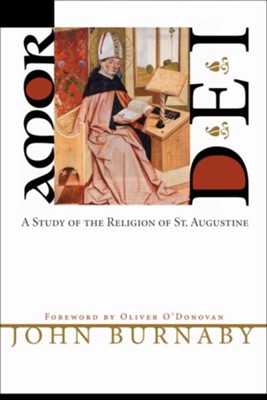 ▼▲
Description: Amor Dei: A Study of the Religion of St. Augustine was first published as the Hulsean Lectures for 1938 when John Burnaby was a classics Fellow of Trinity College, Cambridge. Endorsements: ""In the wake of Pope Benedict's encyclical Deus Caritas Est, which proclaimed the unity of eros and agape, it is most timely to have this fine new edition of Burnaby's great book, which is at once a refutation of Nygren's thesis concerning the separation of the two loves and a still unrivalled exposition of the heart of Augustine's theology."" --John Milbank, University of Nottingham ""John Burnaby limited the aims of his 1938 Hulsean Lectures to a patient exposition of Augustine's religion of divine love. The resulting book, Amor Dei, has earned its place among the handful or so of truly great studies of Augustine in modern times. No doubt the enduring power of Burnaby's study has had much to do with his ability to think with Augustine and not just about him and to bring to Augustine an ethical sensibility that is appropriately skeptical of one-sided goodness. For times still too enamored with ruthless simplifications of love, Amor Dei is a gift."" --James Wetzel, Villanova University, author of Augustine and the Limits of Virtue (Cambridge, 1992) ""John Burnaby's Amor Dei has long been and will long remain one of the few truly classic works on Augustine. Burnaby weaved together the very best of British Classical and Patristic scholarship in the first half of the twentieth century to offer an incisive and near comprehensive account of Augustine's teaching on the love of God. Much has been written subsequently, but all these later works are mere moons around Burnaby's planet."" --Lewis Ayres, Candler School of Theology, Emory University ""Burnaby's Amor Dei is one of the most influential classics in Augustinian literature. Peter Brown, for example, has often acknowledged his debt to this seminal work. In it Burnaby engaged with the fierce debate in twentieth-century scholarship about agape and eros. In doing so he confronted the challenges of Augustine's theology of the Fall, original sin and predestination, and transcended them by demonstrating how the love of God, and the response of love his grace inspires in us, lies at the very heart of Augustine's thought. Burnaby also provides a systematic account of Augustine's theology which I am certain Augustine himself would have recognised and approved, and which has not yet found an equal in modern scholarship."" --Carol Harrison, Durham University, author of Rethinking Augustine's Early Works: An Argument for Continuity (Oxford 2006) ""John Burnaby's masterful establishment of love of God as the center of Augustine's psychology and theology inspired a generation of scholars to the energetic examination and refinement that has characterized the last seventy years of Augustine scholarship. A classic work in its original publication, its republication will refresh readers' awareness of Augustine's passionate advocacy for love of God as the key to happiness."" --Margaret R. Miles, author of Augustine on the Body ""This is a book of singular fascination and distinction. The conception of the love of God is the golden thread that links together the devious and varied phases of St Augustine's spiritual pilgrimage, and its lustre remains untarnished in Mr Burnaby's exposition. . . . He knows Augustine from within, and with the fruit of intuitive sympathy with his personality and prolonged study of his writings, is enabled with an almost unerring sureness of judgment to disentangle . . . what is essential in Augustine's spiritual outlook from those accidental extravagances which have proved such a damnosa heredites in the subsequent history of Christianity."" --W. G. DeBurgh in the Hibbert Journal ."" . . A] profound and intricate study not only of St Augustine's but of the Christian doctrine of love. . . . It is a fine book and worthy of its high theme

▼▲
I'm the author/artist and I want to review Amor Dei.
Back