Skip to main content
Amon's Secret: A Family Story of the First Christians
By: Arnold Ytreeide
Stock No: WW5447709 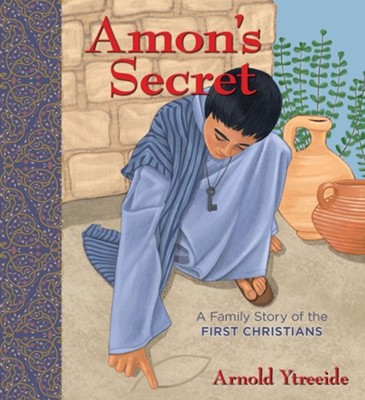 Amon's Secret: A Family Story of the First Christians

▼▲
* Revisit the Jerusalem of Jesus in this captivating family-tailored adventure, Amon's Secret. 13-year-old Amon has watched Jesus ascend into heaven and amidst the confusion Peter entrusts him to distribute secret meeting locations to safeguard the new church's survival. Can Amon dodge cranky Romans, angry Pharisees, and the zealot Sanhedrin Saul intent on hunting down believers? 224 pages, softcover from Kregel.

Adding to his widely popular Advent and Lent series, well-known author Arnold Ytreeide revisits the Jerusalem of Jesus in this captivating follow-up to Amon's Adventure. This time, Ytreeide takes families into the life of one of the founders of the church.

Thirteen-year-old Amon has just watched Jesus ascend into heaven. What will Christ's followers do now? In the midst of Amon's confusion, the apostle Peter hands him an assignment: invent a way for the new Christian church to communicate and meet in secret. It must not be noticed by the penetrating eyes of Jesus' enemies who are still looking for anyone who dared call him the Messiah.

Amon's task quickly turns dangerous. The Sanhedrin, led by Saul, begins hunting down believers in "The Way," even stoning some to death. Now Amon must walk a treacherous line between finishing the job he was given and working safely around those who would kill him if they knew his secret. Can he dodge cranky Romans and angry Pharisees and find a way for the new church to survive?

With short, action-filled chapters, reflections for family devotions, and a foundation of archaeological evidence, Amon's Secret is a fun and powerful way to connect to the church's beginnings.

▼▲
I'm the author/artist and I want to review Amon's Secret: A Family Story of the First Christians.
Back