Skip to main content
SPRING CYBER EVENT STARTS NOW: And it's a really BIG deal! Up to 88% off through 5/24>
Among the King's Soldiers - eBook
By: Gilbert Morris, Aaron McCarver
Stock No: WW33606EB 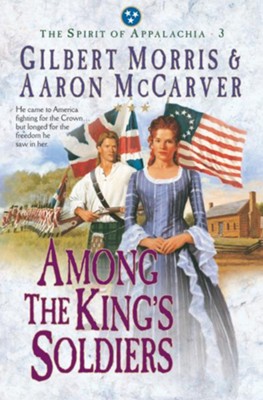 Among the King's Soldiers - eBook

• Chronicles the story of the settlers of America's first frontier--the lands over the Appalachian Mountains--and of the faith that carried them through the harshest of times.

In Among the King's Soldiers, Sarah MacNeal is struggling with the death of Philip Baxter. Her stepbrother, Jacob Spencer, escorts her and her friend Amanda Taylor back across the mountains to Williamsburg to visit Jacob's grandparents. Here Jacob becomes embroiled in a struggle that finally forces him to decide his loyalty between the British and the patriots, and between the two women who have touched his heart.

Meanwhile, Sarah has met a Scottish highlander, Seth Donovan, who is fighting for the British. She has closed her heart to love but finds it very difficult to not become drawn to him. And Seth is struggling with his loyalty to the British crown and a deep longing for the freedom he sees in her life.

When they return to the frontier, they find that the war has reached there. In the Battle of King's Mountain, loyalties and love will finally be proven.

▼▲
Gilbert Morris spent ten years as a pastor before becoming Professor of English at Ouachita Baptist University in Arkansas. He earned a Ph.D. at the University of Arkansas, and did postgraduate work at the University of London. His publishing credits include some two dozen scholarly articles, 200 poems, and more than 200 novels, including series such as House of Winslow, Lions of Judah, and Cheney Duvall, M.D. (coauthored with his daughter, Lynn Morris). Dr. Morris passed away in February 2016. Aaron McCarver teaches drama and Christian literature at Wesley College in Florence, Mississippi. His deep interest in Christian fiction and broad knowledge of the Christian market have given him the background for editorial consultation with all the "writing Morrises" as well as other novelists. It was through his editorial relationship with Gilbert Morris that The Spirit of Appalachia series came to life.

▼▲
I'm the author/artist and I want to review Among the King's Soldiers - eBook.
Back
Back