Skip to main content
Among the Gods - eBook Chronicles of the Kings #5
By: Lynn Austin
Stock No: WW10036EB 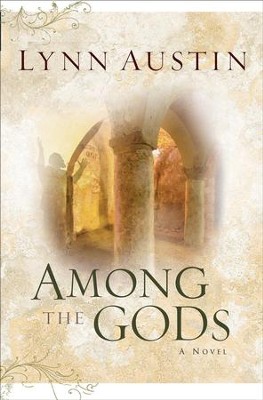 Among the Gods - eBook Chronicles of the Kings #5

▼▲
Fleeing King Manasseh's tyranny, Joshua leads the faithful remnant to their new home in Egypt. But as years pass, Joshua's desire for vengeance becomes an obsession. Blinded by hatred, he makes rash decisions, placing his loved ones in jeopardy. What will it take for him to grasp the great love his Heavenly Father has for him and for the chosen people of Judah?

▼▲
Fleeing King Manasseh's tyranny, Joshua leads the faithful remnant to their new home in Egypt. But as years pass, Joshua's desire for vengeance becomes an obsession. Blinded by hatred, he makes rash decisions, placing his loved ones in jeopardy.

Amid Joshua's turmoil comes an unexpected awakening of love--a love that burns so intensely it draws him from the dark inner seclusion where he often retreats. But what will it take for him to grasp the great love his Heavenly Father has for him...and for the chosen people of Judah?
(Chronicles of the King Book 5)

▼▲
LYNN AUSTIN, a former teacher who now writes and speaks full time, has won three Christy Awards for her historical fiction. One of those novels, Hidden Places, has also been made into a Hallmark Channel movie. Lynn and her husband have raised three children and make their home near Chicago, Illinois.

▼▲
Imagine a land torn by a leader exerting power on his people; a leader so cruel that he kills many of his people for disagreeing with his behavior, gives his newborn son as a human sacrifice, and even forces his own brother into exile. This is Israel in the time of King Manasseh. Among the Gods, the final book in Lynn Austens Chronicles of the Kings series, is set during this time in Israels history.
The biblical character of Joshua takes the lead in this well-crafted tale of redemption and forgiveness. He is the son of a man who was killed in Manassehs attempt to squelch any opposition to his participation in pagan ceremonies and practices. Because of this, Joshua nurses a fierce hatred for Manasseh that grows to become a deep-seated desire for revenge. This desire burns inside of Joshua for much of his life, and he begins to start planning his life around it. He pushes aside Gods will, and makes killing Manasseh his lifes purpose. Joshua allows his anger toward Manasseh to take over his life. He even goes so far as to tell his sister that she cant marry the man she loves. Instead, she must marry the Prince Amariah (King Manassehs exiled brother) in order to produce an heir to take over once Manasseh has lost the throne. Joshua shirks his responsibilities as advisor to the prince and neglects many of his relationships, including his role as father to his adopted son Nathan.
The book is divided into three parts. The first two are concerned mostly with Joshua. For most of the third part, King Manasseh takes center stage when he is arrested and thrown in a jail cell in Egypt. The reader is able to see a great transformation in him during his time there. While the main storyline concerns Joshuas hatred, there are many other secondary storylines that come into play throughout the book. Some romance is sprinkled throughout, and there is also the issue of father/son relationships. The story is a masterful combination of fiction and nonfiction; biblical facts combine with Austens imagination to create a believable tale that has lessons to offer its readers in forgiveness, love, faithfulness, and nurturing.
The anger that plagues Joshua is not something unique to him or to his story. It is because of the struggles that Joshua and the rest of the characters face that this book has take-away value; everyone can learn from Joshuas conversion from angry rebel to forgiving friend. (When I finished this book, I found myself wondering if there was someone whose forgiveness I needed to ask for or someone who needed my forgiveness.) This book will remind readers that God always has a plan and all should seek it; but, even those who dont do so immediately, will discover eventually that God never leaves their side. Those who humble themselves and ask for Gods help will find he is able to work with them in correcting their mistakes.
Among the Gods is one of Austens best works of Christian fiction. I would recommend it to anyone. However, there are a few violent scenes that, though tastefully described, may be inappropriate for younger readers. It is a great story with biblical references and also creative explanations for the parts of Joshuas story that the Bible sheds little or no light on. Austens talent for excellent writing and storytelling really shine through in her most recent book.  Sarah Lachowicz, Christian Book Previews.com

▼▲
I'm the author/artist and I want to review Among the Gods - eBook Chronicles of the Kings #5.
Back
Back