Skip to main content
SPRING CYBER EVENT STARTS NOW: And it's a really BIG deal! Up to 88% off through 5/24>
A Jew Among the Evangelicals: A Guide for the Perplexed
By: Mark I. Pinsky
Stock No: WW230121 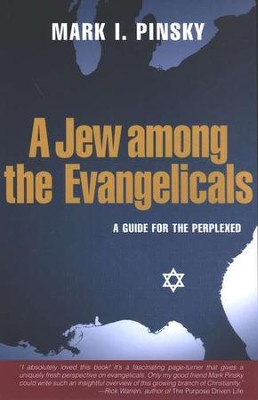 A Jew Among the Evangelicals: A Guide for the Perplexed

▼▲
In this insightful and accessible book, religion journalist Mark Pinsky takes the curious reader on a tour of the fascinating world of Sunbelt evangelicalism. Pinsky, religion reporter for the Orlando Sentinel, uses his unique position as a Jew covering evangelical Christianity to help nonevangelicals understand the hopes, fears, and motivations of this growing subculture and breaks down some of the stereotypes that nonevangelicals have of evangelicals.

"I hope you'll find laughter, perhaps puzzlement, and heartfelt interest in how people just like you wrestle with feelings, values, and beliefs that touch the core of their beings. And I hope you'll catch a glimpse of someone learning to understand and get along with folks whose convictions differ from his own," Pinsky writes in the introduction.

This book will appeal to Jews, mainline and liberal Christians, and curious blue-staters, as well as evangelicals who want to read an outsider's perspective on their culture. As the country takes to the polls for midterm congressional elections, this book will shed light on how and why evangelical culture is becoming increasingly entwined in American politics.

Mark I. Pinsky is religion reporter for the Orlando Sentinel and author of The Gospel according to The Simpsons and The Gospel according to Disney. He was Media Fellow at the Duke Divinity School in spring 2006, and his writing has appeared in the Los Angeles Times, the New York Times, and the Columbia Journalism Review, among others. He appears frequently in national media discussing religion and popular culture.

In this insightful and accessible book, religion journalist Mark Pinsky takes the curious reader on a tour of the fascinating world of Sun Belt evangelicalism. Pinsky, religion reporter for the Orlando Sentinel, uses his unique position as a Jew covering evangelical Christianity to help nonevangelicals understand the hopes, fears, and motivations of this growing subculture and breaks down some of the stereotypes of evangelicalism.

▼▲
Religion journalist Pinsky's (The Gospel According to The Simpsons) political beliefs were shaped in the 1960s and 1970s at Duke and later at Columbia. In 1995, when he became the religion writer for the Orlando Sentinel, which serves an area of Florida that is home to evangelical Christians and national and international Christian missionary organizations, he found himself a Jew among fundamentalists and evangelicals. Here he describes typical Sunbelt megachurch families and other evangelicals holding a range of religious beliefs, noting that some are politically conservative while others lean more to the Left. Pinsky's book is filled with a lot of information that does not fit together neatly. Instead, it is a collection of observations based on his personal friendships with evangelicals and his journalistic inquiry showing the spectrum of beliefs held by evangelicals today. As such, it may have limited appeal to readers, be they evangelicals or nonevangelicals.-George Westerlund, formerly with Providence P.L. Copyright 2006 Reed Business Information.

▼▲
What's a nice Jewish boy doing at a Baptist church on Sunday? This is not the first line of a joke, but the raison d'etre of Pinsky's account of American evangelicalism. Pinsky (The Gospel According to the Simpsons) is a reporter for the Orlando Sentinel, and his beat-religion in the Sunbelt-draws him into close contact with evangelical Christians. Here, he examines evangelical pop culture and asks hard questions about evangelicalism's attitudes toward Judaism. But it is Pinsky's treatment of evangelicals in politics that distinguishes his book from countless other journalistic forays into the land of megachurches and Veggie Tales. Pinsky shows that evangelicalism is much more politically diverse than is often acknowledged. To illustrate, Pinsky takes readers to Calvin College, where a furor erupted when President Bush was invited to speak at graduation; many of the faculty and students at this decidedly evangelical school were appalled, and some boycotted commencement rather than give tacit approval of a president they disdained. Pinsky charts a growing evangelical environmental movement and shows that though many people who believe in a literal six-day Creation are evangelicals, many evangelicals do not hold to creationism. Kudos to Pinsky for offering nuanced reporting instead of stereotypes. (Aug.) Copyright 2006 Reed Business Information.

▼▲
I'm the author/artist and I want to review A Jew Among the Evangelicals: A Guide for the Perplexed.
Back
Back