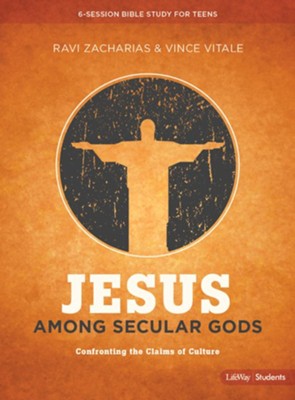 The rise of secular gods presents the most serious challenge to the absolute claims of Jesus since the founding of Christianity itself. Not only has the Christian worldview been devalued and dismissed by modern culture, but its believers are also openly ridiculed as irrelevant.

In this 6-session study for teens, Ravi Zacharias and Vince Vitale challenge the popular "isms" of the day, skillfully point out the errors in their claims, and provide convincing evidence for the absolute truth found in Jesus.

Designed to be used with the 6-session DVD, each weekly study includes information on the topic of the week, video notes, words to know, group questions, prayer, weekly activity, journaling questions, and two personal studies to be completed in-between sessions.

Note: A Leader Guide is included in the back of the book.

Do You Know the Jesus of the Bible?

Belief in the secular gods of atheism, scientism, pluralism, humanism, relativism, and hedonism continues to grow. Can you defend the claims of Christianity?

This six-week Bible study challenges today’s trending beliefs, pointing out the errors in their claims and providing convincing evidence for the absolute truth found in Jesus and revealed in Scripture. Learn how to share your faith in a culture of opposing worldviews and to express why you believe Jesus stands tall above all other gods.

▼▲
RAVI ZACHARIAS is the founder and president of Ravi Zacharias International Ministries (RZIM). For forty-five years, Zacharias has spoken all over the world in many universities, such as Harvard, Dartmouth, Johns Hopkins, and Cambridge. He has addressed writers of the peace accord in South Africa and military officers at the Lenin Military Academy and the Center for Geopolitical Strategy in Moscow. At the invitation of the president of Nigeria, Zacharias addressed delegates at the first annual prayer breakfast for African leaders held in Mozambique. Zacharias has direct contact with key leaders, senators, congressmen, and governors who consult him on an ongoing basis.

Born in India in 1946, Zacharias immigrated to Canada with his family twenty years later. While he was pursuing a career in business management, his interest in theology grew; subsequently, he pursued this study during his undergraduate education. He received his master of divinity from Trinity International University in Deerfield, Illinois. Well-versed in the disciplines of comparative religions, cults, and philosophy, he held the chair of evangelism and contemporary thought at Alliance Theological Seminary for 31/2 years. Zacharias has authored or edited more than twenty-five books. He and his wife, Margie, have three grown children, and they reside in Atlanta.


VINCE VITALE is the director of the Zacharias Institute. He was educated at Princeton University and the University of Oxford, and he later taught philosophy of religion as a faculty member at both of these universities. It was during his undergraduate studies in philosophy at Princeton that Vince took an unexpected journey from skeptic to evangelist. He then completed masters’ and doctoral studies at Oxford.

While researching at Oxford, Vince developed a new response to the problem of evil. This response, termed the nonidentity defense, is discussed in Vince and Ravi Zacharias’s book Why Suffering? Finding Meaning and Comfort When Life Doesn’t Make Sense. In 2017 Vince and Ravi released a second coauthored book, Jesus Among Secular Gods: The Countercultural Claims of Christ.

Vince has commended the Christian faith at many universities, including the University of California, Berkeley; Johns Hopkins; Carnegie Mellon; Princeton; Oxford; and Cambridge. He has also spoken at Google headquarters and Passion City Church.

Vince is married to Jo, who also works with RZIM as the dean of studies for the Zacharias Institute.

▼▲
I'm the author/artist and I want to review Jesus Among Secular Gods, 6-Session Bible Study for Teens.
Back
×
Back
×