We are OPEN and SHIPPING - click here for shipping estimates
PRE-SUMMER CYBER SALE EXTENDED thru 6/1 ~ Over 2,500 items up to 90% off
Jesus among Secular Gods: The Countercultural Claims of Christ - eBook
By: Ravi Zacharias, Vince Vitale 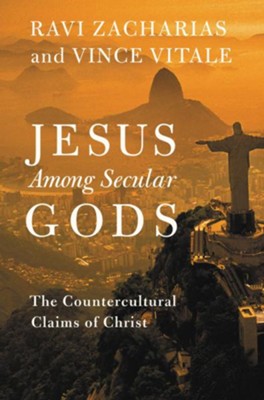 Jesus among Secular Gods: The Countercultural Claims of Christ - eBook

▼▲
Challenging society's beliefs in the "secular gods" of atheism, scientism, relativism, and others, Ravi Zacharias and Vince Vitale skillfully point out the fallacies in their claims. Presenting compelling evidence for absolute truth as found in the Bible, they help you articulate why Jesus is who he said he is and defend the claims of Christ to others.

Ravi Zacharias is the Founder and President of Ravi Zacharias International Ministries, headquartered in Atlanta, Georgia, with additional offices in Canada, Hong Kong, India, Singapore, the United Kingdom, Austria, South Africa, Spain, and Turkey. Zacharias and his wife, Margie, have three grown children. He is the author of many books, including Can Man Live Without God and Why Jesus?

Dr. Vince Vitale is Director of the Zacharias Institute. He was educated at Princeton University and the University of Oxford, and later taught philosophy of religion as a faculty member at both universities. During his undergraduate studies at Princeton, Dr. Vitale took an unexpected journey that led him to God. Later, while at Oxford, he developed a new response the problem of evil. This response--termed the Non-Identity Defense--is discussed in his and Ravi Zacharias's previous book, Why Suffering? He is married to Jo, who also works for RZIM

Tell us a little about yourself.  For me, writing is an extension of experiencing life--and in particular engaging with other people--with God as a constant guide and conversation partner.

Last week I met a primary school teacher who told me about how recently one of the children in her class suggested that belief in some gods is better than belief in other gods.

The sad thing is that this teacher I was talking with thought she had responded really helpfully to her student. And the sadder thing is that that child may carry that experience with him for many years, assuming that seeking right answers about the deep questions of life is a stupid thing to do.

I wish she had told this child that he had raised a very good question, and that there is nothing more important in life than seeking the answer to that question: Are all gods the same? And, if not, which god is worth following? I believe how you answer those questions will have far greater consequences for your life than anything else.

What was your motivation behind this project?  Every one of us will follow something in life, whether a religious God or a secular God. Something will set us on a trajectory that ten, twenty, thirty years from now will determine the person we have become, the life we have lived, the impact we have had on others, and the legacy we will leave. Most people wind up following a way of life not because they ever chose to, but because in a sense they chose not to choose. They got distracted by the pressures and details of life, and they just happened to fall into a way of thinking and a way of life without ever really reasoning it through. Jesus Among Secular Gods is written for anyone desiring to make an informed decision about what or who to follow. Our colleague Os Guinness says that "Contrast is the mother of clarity." Never is the truth more clear that when we set it alongside its alternatives. Another way of putting this is, "Criticism without alternative is empty." Many people have criticized Christianity. Criticized it in favor of what? This book sets Jesus alongside the gods of today: atheism, scientism, naturalism, pluralism, humanism, relativism, hedonism, and more. If Jesus is who he said he was, then a Christian should have no fear in making this comparison. And I hope what people will find is that when the options are laid out beside each other, the differences between them are great, and there is one option that stands far and away above all the rest.

What do you hope folks will gain from this project?  Jesus Among Secular Gods is written for the many people who have heard rumors against God, and have had no clear, accessible way of evaluating those rumors. For example, people say that science has disproved God, but they rarely explain exactly how science has disproved God. Ravi and I argue in Jesus Among Secular Gods that far from science disproving God, there has not been a single scientific discovery that has even the least tendency to disprove God. That's a big claim, but we're confident we can defend it, and we go on to discuss four major ways in which science actually points strongly to the existence of God. Are the rumors people have heard about God the result of good reasoning, or are they just rumors? We hope Jesus Among Secular Gods will help many to distinguish rumor from reality, and to make an informed decision about the only God who is trustworthy and the only God who is worth following.

How were you personally impacted by working on this project?  Someone once said that there are two ways to choose a coat: You can get out your ruler and evaluate its measurements, or you can pick it up and try it on. Jesus Among Secular Gods offers many reasons for thinking that the Christian worldview outshines the other secular worldviews on offer. But it also offers an opportunity to try on the coat. Ravi and I have poured a lot of our own experiences into this book, as well as the experiences of many others that we have met and journeyed with in many different places of the world. We want you to come away from reading this book with a coherent theory based on strong evidence. But, equally, we hope what you will find in this book is an invitation into a way of life that is most strongly recommended by actually stepping into it and seeing that at the heart of Christianity are not just ideas and isms but a life-giving relationship that will make the most practical and invaluable difference in your day to day. That is what we have found in Jesus, and we are praying that God will grant that incomparably great gift to every person who reads this book.

Who are your influences, sources of inspiration or favorite authors / artists?  Increasingly, the gods of this age are atheism, scientism, naturalism, pluralism, humanism, relativism, hedonism - the list goes on. The gods of this age are theories that we create rather than a God who created us. And the reason these theories ultimately don't satisfy is because we were created to be lovers of truth. But it is very hard to love a theory. A theory is too abstract to be loved in the deepest sense. To love the truth deeply, truth needs to be not a theory, but a person. Only Jesus makes truth personal. Jesus is the only truth that is a person, and therefore the only truth that we can truly be in relationship with, and therefore the only truth that we can truly love. Jesus Among Secular Gods is for everyone who deep down in inspired to be a lover of truth. And it suggests that that truth is not an ism or a theory, but the person of Jesus.

Anything else you'd like readers / listeners to know:  Perhaps never before has it been more difficult to seek the Truth about the deepest questions of life. First, because there are so many options on the table that it is overwhelming and paralyzing. It's like when you go to a restaurant and the menu is so big that you don't even know where to start and you've lost your appetite by the time you're ready to order. Second, we live in a society where to even gesture in the direction of thinking that one answer to these questions might be better than another is immediately branded offensive, narrow-minded, and intolerant. Jesus Among Secular Gods is intended to be a guide that will clearly map out how various ways of seeing the world are importantly different, and will help people to make an informed decision about the most important of all questions: What or who will set the trajectory of your life? Our prayer is that this book will help many people to set the trajectory for life that they were intended for and that they will find true meaning and peace and joy in. This starts by getting to know the truth about the God who created them, and who loves them, and who has proven that he is absolutely committed to them. We hope you will enjoy the book, and we hope you will share the book with those who are seeking answers to the deepest questions of life.