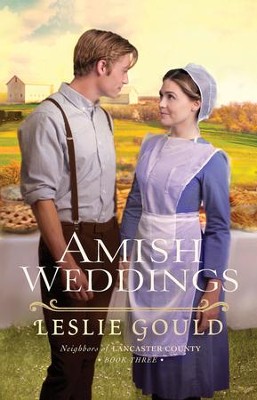 By: Leslie Gould
More in Neighbors of Lancaster County Series
Bethany House / 2017 / Paperback
5 out of 5 stars for Amish Weddings #3 (26 Reviews) Write a Review
In Stock
Stock No: WW216947

Amish Weddings is the third novel in the Neighbors of Lancaster County series.

Shortly before Lila and Zane get married a devastating accident occurs, postponing the wedding.  Her sister Rose has it set in her mind to marry the bishop’s son Reuben. He had wanted to wait until after Lila and Zane’s marriage. When Zane’s Army friend comes to town and starts showing attention to Rose, she sees how similar their personalities are. Now that the wedding is postponed, will Reuben continue to wait or will he fight for her love?

Gregarious Rose Lehman, who's always the life of the Amish youth singings, is determined to marry the bishop's son, Reuben Byler--until the handsome Army buddy of her future brother-in-law shows up in Lancaster County. In comparison to Trevor, Reuben seems downright boring. Trevor shares Rose's sense of fun and adventure, and her easygoing disposition.

When her sister Lila's buggy is rear-ended and Lila is horribly injured, Rose finds herself with more freedom than she's ever experienced. Everyone is so concerned about Lila that no one realizes Rose is sneaking out with Trevor. Except for Reuben. But in his usual passive way, he doesn't confront her, nor does he address the situation with her Dat or anyone else in the district. Rose appreciates Reuben's discretion, but she also resents it. Part of her relishes the freedom she's found with Trevor, but the other part of her wishes Reuben would "fight" for her, as much as any Amish man would. Too late, she realizes the foolish choice she's made. Has she ruined her best chance at love, or is there another path to happiness she just hasn't seen yet?

▼▲
Leslie Gould is the coauthor, with Mindy Starns Clark, of the #1 bestselling The Amish Midwife and The Amish Nanny. She is also the author of numerous novels including two Lancaster Amish series. She holds an MFA in creative writing from Portland State University and has taught fiction writing at Multnomah University as an adjunct professor. She resides with her husband and four children in Oregon. Learn more at www.lesliegould.com.

▼▲
I'm the author/artist and I want to review Amish Weddings #3.
Back
Back