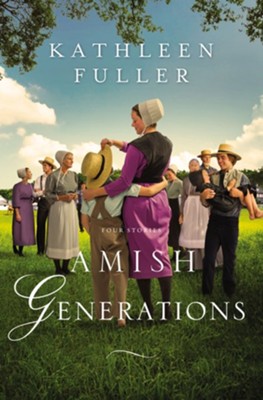 Four sweet and funny Amish love stories, spanning four different generations. Love comes at all times and for all ages!

Young Love—When Fern was diagnosed with a chronic illness in her early twenties, she knew it would limit her abilities to be a good Amish wife. And with Dan, the object of her affection, in a serious relationship, there didn’t seem much point in dating. But Dan is now single, and he seems to be taking notice of Fern. She’ll need a strong dose of courage to talk down the fear her illness has brought on if she ever wants to pursue her dreams.

Long-Awaited Love—When Everett left ten years ago, Jemima’s love quickly turned to hate. But when they arrive back home at the same bus station on the same day, they discover some old flames aren’t put out so easily. Can they move past the forces that pulled them apart ten years ago, or are some hurts too much to overcome?

Second-Chance Love—Benjamin and Lora Beth both lost spouses not long into their young marriages and connect over letters, exchanging recipes and commiseration as their now-grown children try to coddle them. They’re only in their forties, for heaven’s sake! The letters quickly reveal a deep friendship . . . or could it be more? When you’ve already had a great love, how do you learn to fall in love again?

Never Too Late—Jerald is a committed old bachelor. He loves nothing more than good Amish food and giving his best friend’s wife, Regina, a hard time. When people have asked—and believe him, people have asked—he’s always said he’ll marry when he finds the right woman. It’s just never happened in his seventy years. Until he tastes the best blueberry pie and discovers the woman behind it: Regina’s best friend, Elva.

▼▲
I'm the author/artist and I want to review Amish Generations: Four Stories - eBook.
Back
×
Back
×