Skip to main content
SPRING CYBER EVENT STARTS NOW: And it's a really BIG deal! Up to 88% off through 5/24>
My Amish Childhood: A True Story of Faith, Family, and the Simpler Life
By: Jerry S. Eicher
Stock No: WW950060 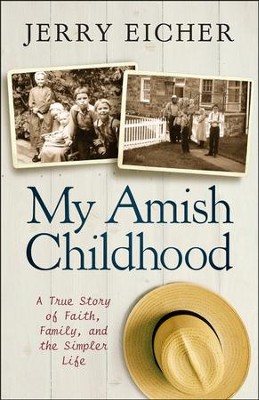 My Amish Childhood: A True Story of Faith, Family, and the Simpler Life

▼▲
A moving memoir about growing up Amish! Offering an inside look at his childhood among the Plain People, Eicher recounts his life in the community of Aylmer, Ontario; his family's years in Honduras and their return to America; his struggle with stuttering; his conversion to Christ; and his reasons for departing the Amish faith. 256 pages, softcover from Harvest.

Bestselling fiction author Jerry S. Eicher (nearly half a million books sold) turns his pen to a moving memoir of his life growing up Amish.

Jerry’s mother was nineteen years old and nine months married when he was born. She had received Grandfather Stoll’s permission for the wedding because she agreed to help out on the farm the following year. However, with Jerry on the way, those plans failed.

Jerry recounts his first two years of school in the Amish community of Aylmer, Ontario and his parents’ decision to move to Honduras. Life in that beautiful Central American country is seen through an Amish boy’s eyes—and then the dark days when the community failed and the family returned to America, much to young Jerry’s regret. Jerry also tells of his struggle as a stutterer and his eventual conversion to Christ and the reasons for his departure from the childhood faith he knew.

Here is a must-read for not just Jerry’s fiction fans, but also for readers curious about Amish life.

▼▲
Imagine an Amish woman teaching her son about sexual mores while they wait for new tires to be put on the station wagon transporting them home. Throw out your stereotypesthis is Amish life through Eichers eyes. Eicher (a bestselling author of Amish fiction including the popular Hannahs Heart series) takes readers back through his memories of childhood, those hazy years when time drags. The tale follows his family from 1968 to 1977, when they left the rules (or ordnung) of Amish society in Aylmer, Ontario, to start a new community in Honduras. Eicher unveils surprise after surprise, from his fathers being robbed at gunpoint to Eichers keeping a pet monkey as well as the realization that the Amish were the economic elite among their Third World peers. Readers will find they can, perhaps unexpectedly, relate to the politics of the Honduran Amish community and Eichers own struggles with stuttering and depression. Fans of his fiction will fall in love with the characters that form the basis for his novels. (Feb.) 2012 Reed Business Information

“This is a wonderful historical account of an Amish group's experience. It was very fascinating to me. I highly recommend this book.”
—Rhonda Nash-Hall

“For those fascinated by the Amish culture and lifestyle, I recommend Eicher's autobiography.”
—Brandy Bruce, editor and writer

“I must admit, I thought I knew a lot about the Amish until I read this book, which is packed full of information. I also gained insight into Jerry and what made him the author he is today! No wonder he writes with such understanding of the Plain People. A great book that you should not miss reading!”
—Karla Hanns, karla-hanns-karla.blogspot.com

“This is a very enlightening book about Jerry Eicher’s childhood.”
—Wendy Newcomb, wrensthoughts.blogspot.com

▼▲
I'm the author/artist and I want to review My Amish Childhood: A True Story of Faith, Family, and the Simpler Life.
Back
Back