Skip to main content
Washed Away: How the Great Flood of 1913, America's Most Widespread Natural Disaster, Terrorized a Nation and Changed It Forever - eBook
By: Geoff Williams
Stock No: WW51772EB 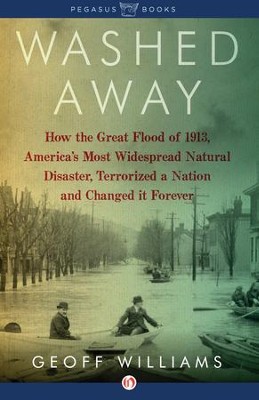 Washed Away: How the Great Flood of 1913, America's Most Widespread Natural Disaster, Terrorized a Nation and Changed It Forever - eBook

▼▲
The true story of a catastrophic weather event that will "interest readers who enjoyed Erik Larson’s Isaac’s Storm" (Booklist).

This is the incredible account of a flood of near-Biblical proportions in early twentieth-century America—its destruction, its heroes, its victims, and how it shaped natural-disaster policies in the United States for the next hundred years.

The storm began March 23, 1913, with a series of tornadoes that killed 150 people and injured 400. Then the freezing rains started and the flooding began. It continued for days. Some people drowned in their attics, others on the roads when they tried to flee. It was the nation’s most widespread flood ever—more than 700 people died, hundreds of thousands of houses and buildings were destroyed, and millions were left homeless. The destruction extended far beyond the Ohio Valley to Illinois, Indiana, Michigan, Nebraska, Pennsylvania, Tennessee, Arkansas, Louisiana, Kentucky, West Virginia, New York, New Jersey, and Vermont—fourteen states in all, and every major and minor river east of the Mississippi.

In the aftermath, flaws in America’s natural disaster response system were exposed, much as they would be nearly a century later in the wake of Hurricane Katrina. People demanded change. Laws were passed, and dams were built. Teams of experts vowed to develop flood control techniques for the region and stop flooding for good. So far, those efforts have succeeded—it is estimated that in the Miami Valley alone, nearly two thousand floods have been prevented, and the same methods have been used as a model for flood control nationwide and around the world.

This suspenseful historical tale of a dramatic yet little-remembered disaster "weaves tragic and heroic stories of people in the various affected states into an almost hour-by-hour account of the deadly storm" (Booklist).

▼▲
Geoff Williams is a longtime newspaper and magazine journalist, and the author of C. C. Pyle’s Amazing Foot Race: The True Story of the 1928 Coast-to-Coast Run Across America (Rodale, 2007). His writing has appeared in National Geographic World, Life, the Cincinnati Post, and much more. He has appeared on CNN and NPR’s Talk of the Nation. For most of his life, Williams has lived less than an hour away from the Great Flood’s epicenter in Dayton, Ohio.

▼▲
Praise for Geoff Williams
"Williams meticulously and brilliantly captures the roughly 2,000-mile journey and the larger-than-life characters. The result is a fine, unlikely, and intimate journey into the American past, across the deserts, mountains and plains with heroes bearing wild aspirations long since gone." —The Washington Post
"Williams has evocatively recreated a long-forgotten event, mixing colorful anecdotes from the race with vivid portraits of the runners." —Publishers Weekly
"Williams recounts the story with gusto, giving us a real sense of the physical and mental toll. The book is like a time capsule—and an extremely entertaining one at that." —Booklist

▼▲
I'm the author/artist and I want to review Washed Away: How the Great Flood of 1913, America's Most Widespread Natural Disaster, Terrorized a Nation and Changed It Forever - eBook.
Back
Back