Skip to main content
CUSTOMER APPRECIATION SALE: Thousands of starry deals through 6/22!
America's Unholy Ghosts The Racist Roots of Our Faith and Politics
By: Joel Edward Goza
Stock No: WW651435 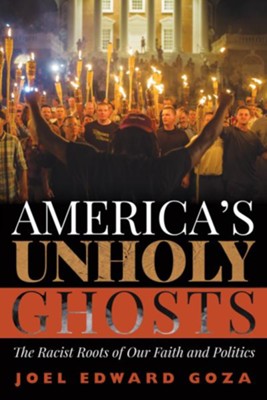 America's Unholy Ghosts The Racist Roots of Our Faith and Politics

America’s Unholy Ghosts examines the DNA of the ideologies that shape our nation, ideologies that are as American as apple pie but that too often justify and perpetuate racist ideas and racial inequalities. MLK challenged us to investigate the “ideational roots of race hate” and Ghosts does just that by examining a philosophical “trinity”—Thomas Hobbes, John Locke, and Adam Smith—whose works collectively helped to institutionalize, imagine, and ingrain racist ideologies into the hearts and minds of the American people.

As time passed, America’s racial imagination evolved to form people incapable of recognizing their addiction to racist ideas. Thus, Ghosts comes to a close with the brilliant faith and politics of Martin Luther King, Jr. who sought to write the conscience of the Prophetic Black Church onto American hearts, minds, and laws. If our nation’s racist instincts still haunt our land, so too do our hopes and desires for a faith and politics marked by mercy, justice, and equity—and there is no better guide to that land than the Prophetic Black Church and the one who saw such a land from the mountaintop.

▼▲
I'm the author/artist and I want to review America's Unholy Ghosts The Racist Roots of Our Faith and Politics.
Back