We are OPEN and SHIPPING - click here for shipping estimates
PRE-SUMMER CYBER SALE EXTENDED thru 6/1 ~ Over 2,500 items up to 90% off
AMERICA'S THEOLOGIAN
By: Robert W. Jenson 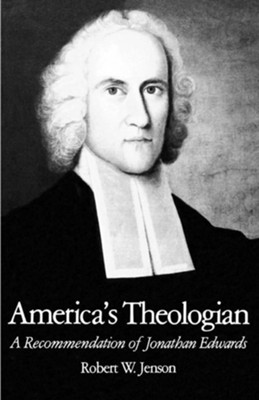 ▼▲
A great deal has recently been written about Jonathan Edwards. Most of it, however, does not make central Edwards's own intention to speak truth about God and the human situation; his systematic theological intention is regarded merely as an historical phenomenon. In this book, Robert Jenson provides a different sort of interpretation, asking not only, "Why was Edwards great?" but also, "Was Edwards right?" As a student of the ideas of Newton and Locke, Jenson argues, Edwards was very much a figure of the Enlightenment; but unlike most other Americans, he was also a discerning critic of it, and was able to use Enlightenment thought in his theology without yielding to its mechanistic and individualistic tendencies. Alone among Christian thinkers of the Enlightenment, Edwards conceived an authentically Christian piety and a creative theology not in spite of Newton and Locke but by virtue of them. Jenson sees Edwards's understanding as a radical corrective to what commitment to the Enlightenment brought about in American life, religious and otherwise. Perhaps, Jenson proposes, recovery of Edwards's vision might make the mutual determination of American culture and American Christianity more fruitful than it has yet been.

▼▲
I'm the author/artist and I want to review AMERICA'S THEOLOGIAN.
Back
×