Skip to main content
America's Church: The National Shrine and Catholic Presence in the Nation's Capital
By: Thomas A. Tweed
Stock No: WW782987 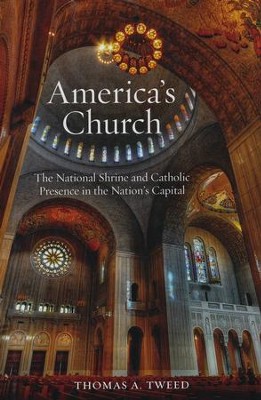 America's Church: The National Shrine and Catholic Presence in the Nation's Capital

▼▲
Praised as a "dazzling jewel" and denounced as "the great disappointment," the National Shrine in Washington, D.C., has been a focal point for Catholics since 1920. In this fascinating narrative, Tweed weaves the story of the church's construction with six defining themes to illustrate how the building reflects the changing landscape of 20th-century American Catholicism. Jacketed hardcover.

▼▲
The National Shrine in Washington, DC has been deeply loved, blithely ignored, and passionately criticized. It has been praised as a "dazzling jewel" and dismissed as a "towering Byzantine beach ball." In this intriguing and inventive book, Thomas Tweed shows that the Shrine is also an
illuminating site from which to tell the story of twentieth-century Catholicism. He organizes his narrative around six themes that characterize U.S. Catholicism, and he ties these themes to the Shrine's material culture--to images, artifacts, or devotional spaces. Thus he begins with the Basilica's
foundation stone, weaving it into a discussion of "brick and mortar" Catholicism, the drive to build institutions. To highlight the Church's inclination to appeal to women, he looks at fund-raising for the Mary Memorial Altar, and he focuses on the Filipino oratory to Our Lady of Antipolo to
illustrate the Church's outreach to immigrants. Throughout, he employs painstaking detective work to shine a light on the many facets of American Catholicism reflected in the shrine.

▼▲
Thomas A. Tweed is Shive, Lindsay, and Gray Professor of Religious Studies at the University of Texas, Austin. He is the author of Our Lady of the Exile and Crossing and Dwelling.

▼▲
"Demonstrates...crisp methodological precision...Tweed's investigation provides a succinct history of American Catholicism, involves a number of multidisciplinary excursuses into fields such as paleo-Christian art history and pilgrimage, and proffers a host of delightful en passant historical
references, including the Hays Code, Dr. Spock, and the Ku Klux Klan. The ambitious span of America's Church explains in admirable detail how the history of the Shrine intersects with its many levels of meaning."--Journal of the American Academy of Religion
"The Basilica of the National Shrine competes for attention on the Washington skyline with more familiar monuments, but it always stands out. Tweed masterfully explores its deep religious and cultural meanings for Catholics and non-Catholics alike."-- James M. O'Toole, Clough Chair in History
Boston College

"America's Church is a work of extraordinary erudition and methodological sophistication. Using the history of the National Shrine of the Immaculate Conception as a lens for viewing the vast--and vastly complex--landscape of 20th century American Catholic culture, Tweed considers themes as diverse
as architecture, iconography, gender, childhood, ethnicity, pilgrimage, philanthropy, and soteriology. He combines a journalist's eye for the telling detail with a scholar's ability to discern trends and patterns that truly matter. And all of it presented in prose as clear as it is elegant."--
Grant Wacker, Professor of Christian History, Duke University

"This is an astonishingly innovative and detailed examination of a building and the presences--tangible and intangible, saintly and human, lay and ordained, male and female, young and old--that are enshrined there. The book exemplifies many things we have come to expect of the author: a clear,
easily accessible prose style; a wide-ranging analysis backed by extensive footnotes; and an eye for how the particular can illuminate large questions. Tweed provides a way forward for scholars of Catholicism in the U.S. who recognize that the old top down narrative is inadequate, but have yet to
come up with a way to suggest the complexity of the whole."--Ann Taves, Virgil Cordano OFM Professor of Catholic Studies, University of California-Santa Barbara

"America's Church: The National Shrine of the Immaculate Conception and Catholic Presence in the Nation's Capital is a significant work of historical scholarship that exposed the monumental tasks that accompanied not only the building of a Catholic place of worship, but also the great skills
employed by American Catholics to become a civil and religious presence in the nation's capital and in all aspects of American society." -- Catholic News Service

▼▲
I'm the author/artist and I want to review America's Church: The National Shrine and Catholic Presence in the Nation's Capital.
Back
Back