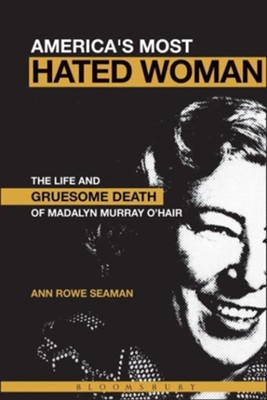 America's Most Hated Woman: The Life and Gruesome Death of Madalyn Murray O'Hair

Why did Life Magazine dub her "the most hated woman in America"?

Did she unravel the moral fiber of America or defend the Constitution?

They found her heaped in a shallow grave, sawed up, and burned. Thus ended Madalyn Murray O'Hair, the articulate "atheist bitch" whose 1963 U.S. Supreme Court case ended school prayer. Her Christian-baiting lawsuits spanned three more decades; she was on TV all over the country, foul-mouthed, witty, and passionate, launching today's culture wars over same-sex marriage and faith-based initiatives.

She was a man-hater who loved sex, a bully whose heart broke for the downtrodden. She was accused of schizophrenia, alcoholism, and embezzlement, but never cowardice or sloth. She was an ideologue who spewed toxic rage even at the followers who made her a millionaire. She was a doting mother who accosted people to ask them to be sexual partners for her lonely children, and whose cannibalistic love led her children to their grave. She thrived on her fame, but just as the curtain of obscurity began to lower, the family vanished in one of the strangest of America's true crimes.

This is the real story of "the most hated woman in America," by the only author to interview the killer and those close to him and to witness the family's secret burial in Austin, Texas.

From the First Chapter
The sky was gray and drizzling, but it had stopped at the funeral home by quarter to nine. Billy Murray hadn't spoken to his three family members for more than twenty years, but he wanted to give them a decent burial.

Bill was an ordained minister, but he didn't pray over the charred, sawed-up remains. "Baptists don't pray for the dead," he said. "They either accept Christ before they died or they didn't."

He had his mother cremated in accordance with her oft-expressed wish. Her urn sat at the head of the burial vault, as was appropriate, for she had ruled the other two with an iron hand. She was Madalyn Murray O'Hair, 76, founder of American Atheists, and the Most Hated Woman in America-a sobriquet she relished.

The other two were his half-brother, Jon Garth Murray, 40, and his daughter, Robin Murray-O'Hair, 30. It had taken five years to find them and bring them to the cemetery for the service, which was kept secret from the public.

It was their second burial. Jerry Carruth, the prosecutor who had searched for the family for nearly four years, had watched them being excavated from their shallow mass grave on a South Texas ranch some months before. He was watching the shoveling, looking for the hip replacement joint Madalyn had gotten in 1988. When they found that, he'd know he'd found Madalyn.

"There it was," he said, "shining in the sun like a trailer hitch."

▼▲
I'm the author/artist and I want to review America's Most Hated Woman: The Life and Gruesome Death of Madalyn Murray O'Hair.
Back