Skip to main content
America's Rise to Greatness Under God's Covenant: From the Late 1880S to the End of the 1950S
By: Miles Huntley Hodges
Stock No: WW681046 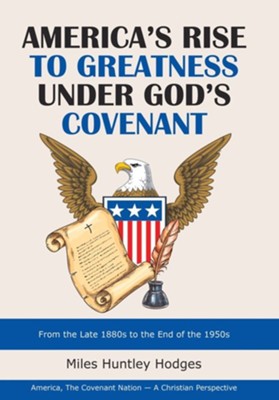 America's Rise to Greatness Under God's Covenant: From the Late 1880S to the End of the 1950S

▼▲
This book is part of a three-part series on America as a Covenant Nation. This volume covers from the rise of America's industrial revolution in the late 1800s to America's taking the position in the Cold-War 1950s as the leader of the "Free World." It is a typical social (political, economic, and military) history of America-untypical however in how it connects the intellectual, moral and spiritual character of America with those same social events. It takes the reader through the days of Western imperialism, World War One, the Roaring Twenties, the Great Depression, World War Two, the beginning of the Cold War, and finally the age of Middle-America's grand success (the 1950s). It focuses heavily on the leaders (most frequently the country's presidents) and how their own personal spirituality shaped their times-and the way the Christian community in particular responded to both the social challenges facing it and the spiritual leadership attempting to inspire and guide it. It seeks to give the Christian reader (or Secular reader if he or she is willing to be challenged) a highly-detailed knowledge of the historical path-social and spiritual-that has brought us to today's world ... and its enormous challenges.

▼▲
I'm the author/artist and I want to review America's Rise to Greatness Under God's Covenant: From the Late 1880S to the End of the 1950S.
Back