We are OPEN and SHIPPING - click here for shipping estimates
PRE-SUMMER CYBER SALE EXTENDED thru 6/1 ~ Over 2,500 items up to 90% off
America's God: From Jonathan Edwards to Abraham Lincoln
By: Mark A. Noll 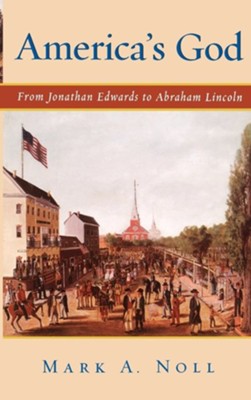 Buy Item $162.50
In Stock
Quantity:
Stock No: WW151119
Oxford University Press / Hardcover
Quantity:
Add To Cart
of These in Your Cart

By: Mark A. Noll
Oxford University Press / Hardcover
Write a Review
In Stock
Stock No: WW151119

▼▲
Often, religious thought in early America is simply equated with the severe Puritanism of Cotton Mather, or it is assumed to be some other product of European church life imported to North America. Yet, by the middle of the nineteenth century, theology in the United States had shifted dramatically away from European traditions associated with the Reformation and had become distinctively American. In this book, Mark Noll has provided a masterly account of this translation and what it signified for the meaning of Christian theology itself.
In the decades preceding the outbreak of the Civil War, American theologians mastered the conceptual languages of republican political thought and commonsense moral reasoning. Because religious thinkers learned to speak these languages so well, Christian theology came to play an extraordinarily important role in American public life. Theology contributed profoundly to the new nation's self-definition and in turn, American ideologies exerted a profound impact on religion. Public thought and religious thought moved together, with a stress on individual freedom, a new confidence in intuitive reasoning capacity, and attention to the market realities of the opening American economy. By setting the era's leading religious figures in their broader political, intellectual, and social contexts, Noll is able to offer fresh interpretations of the era's most significant theologians like Jonathan Edwards, Nathaniel W. Taylor, William Ellery Channing, and Charles Hodge, as well as important lay religious thinkers like Thomas Jefferson, Harriet Beecher Stowe, Catherine Beecher, and Abraham Lincoln.

▼▲
Religious life in early America is often equated with the fire-and-brimstone Puritanism best embodied by the theology of Cotton Mather. Yet, by the nineteenth century, American theology had shifted dramatically away from the severe European traditions directly descended from the Protestant Reformation, of which Puritanism was in the United States the most influential. In its place arose a singularly American set of beliefs. In America's God, Mark Noll has written a biography of this new American ethos. In the 125 years preceding the outbreak of the Civil War, theology played an extraordinarily important role in American public and private life. Its evolution had a profound impact on America's self-definition. The changes taking place in American theology during this period were marked by heightened spiritual inwardness, a new confidence in individual reason, and an attentiveness to the economic and market realities of Western life. Vividly set in the social and political events of the age, America's God is replete with the figures who made up the early American intellectual landscape, from theologians such as Jonathan Edwards, Nathaniel W. Taylor, William Ellery Channing, and Charles Hodge and religiously inspired writers such as Harriet Beecher Stowe and Catherine Stowe to dominant political leaders of the day like Washington, Jefferson, and Lincoln. The contributions of these thinkers combined with the religious revival of the 1740s, colonial warfare with France, the consuming struggle for independence, and the rise of evangelical Protestantism to form a common intellectual coinage based on a rising republicanism and commonsense principles. As this Christian republicanism affirmed itself, it imbued in dedicated Christians a conviction that the Bible supported their beliefs over those of all others. Tragically, this sense of religious purpose set the stage for the Civil War, as the conviction of Christians both North and South that God was on their side served to deepen a schism that would soon rend the young nation asunder. Mark Noll has given us the definitive history of Christian theology in America from the time of Jonathan Edwards to the presidency of Abraham Lincoln. It is a story of a flexible and creative theological energy that over time forged a guiding national ideology the legacies of which remain with us to this day.

▼▲
I'm the author/artist and I want to review America's God: From Jonathan Edwards to Abraham Lincoln.
Back
×