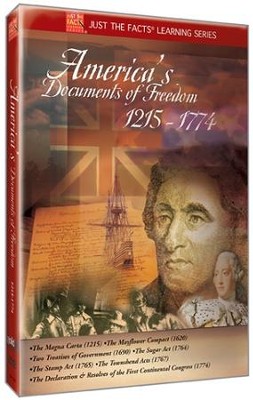 ▼▲
American democracy has a linage of written records that we can trace to show the development of our nation, and how each document builds on those before it to make our foundation of freedom stronger. In this video we look at the documents conceived in the formative years of democratic thought and during the Colonial Era. Educators from noted American universities share their insights on: The Magna Carta (1215) -- It may not be immediately obvious, but an English document from the 13th century does have a bearing on American democracy. It established foundations for the protection of individual rights and constitutional government in a society that had previously been totally subservient to a monarch. The Mayflower Compact (1620) -- The Puritan Separatists who came over on the Mayflower penned this document, which is sometimes called the first Constitution. They were people previously subject to the English king and persecuted for their religious beliefs. Their Compact established a new colony at Plymouth and one of the first experiments in self-government.Two Treatises of Government (1690) -- John Locke, the author the Two Treatises of Government, was looked up to by the founding fathers of America. He exerted enormous influence with his philosophy on how government should be structured. His words are found in our Declaration of Independence and the U.S. Constitution. The Sugar Act (1764), The Stamp Act (1765), and The Townshend Acts (1767) -- The Sugar Act, The Stamp Act and The Townshend Act were all attempts on the part of England to tax the colonies to recoup revenues from the costly French and Indian War. They resulted in the colonial protest, "taxation without representation." The colonists resisted. The Boston Massacre and the Boston Tea Party eventually resulted. The Declaration and Resolves of the First Continental Congress (1774) -- While stating loyalty to the crown, this step toward liberty asserted that the colonists had a right to the "free and exclusive power of legislation in their several provincial legislatures." It was one step closer to a free society. Grade Level: 7+. 30 minutes.