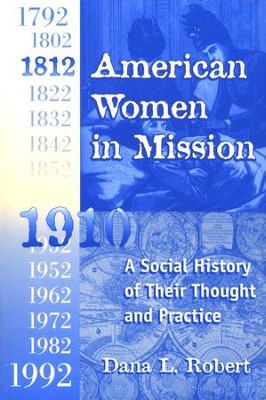 ▼▲
American Women in Mission is the first book on women in mission to include mainline Protestant, Evangelical, and Roman Catholic women in one narrative. Chronological in scope, comprehensive in research and written with clarity, this is the definitive treatment of American women in missions. The Modern Mission Era 1792- 1992.

▼▲
The stereotype of the woman missionary has ranged from that of the longsuffering wife, characterized by the epitaph "Died, given over to hospitality", to that of the spinster in her unstylish dress and wire-rimmed glasses, alone somewhere for thirty years teaching heathen children. Like all caricatures, those of the exhausted wife and frustrated old maid carry some truth: the underlying message of the sterotypes is that missionary women were perceived as marginal to the central tasks of mission. Rather than being remembered for preaching the gospel, the quintessential male task, missionary women were noted for meeting human needs and helping others, sacrificing themselves without plan or reason, all for the sake of bringing the world to Jesus Christ.

Historical evidence, however, gives lie to the truism that women missionaries were and are doers but not thinkers, reactive secondary figures rather than proactive primary ones. The first American women to serve as foreign missionaries in 1812 were among the best-educated women of their time. Although barred from obtaining the college education or ministerial credentials of their husbands, the early missionary wives had read their Jonathan Edwards and Samuel Hopkins. Not only did they go abroad with particular theologies to share, but their identities as women caused them to develop gender-based mission theories. Early nineteenth-century women seldom wrote theologies of mission, but they wrote letters and kept journals that reveal a thought world and set of assumptions about women's roles in the missionary task. The activities of missionary wives were not random: they were part of a mission strategy that gave women a particular role inthe advancement of the reign of God.

By moving from mission field to mission field in chronological order of missionary presence, Robert charts missiological developments as they took place in dialogue with the urgent context of the day. Each case study marks the beginning of the mission theory. Baptist women in Burma, for example, are only considered in their first decades there and are not traced into the present. Robert believes that at this early stage of research into women's mission theory, integrity and analysis lies more in a succession of contextualized case studies than in gross generalizations.

▼▲
I'm the author/artist and I want to review American Women in Mission.
Back
Back