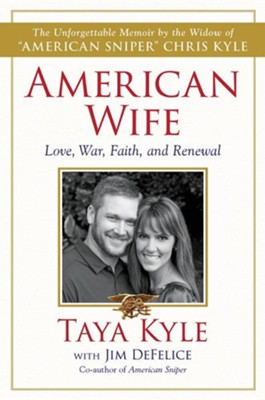 American Wife: A Memoir of Love, War, Faith, and Renewal

The widow of “American Sniper” Chris Kyle shares their private story: an unforgettable testament to the power of love and faith in the face of war and unimaginable loss--and a moving tribute to a man whose true heroism ran even deeper than the legend

In early 2013, Taya Kyle and her husband Chris were the happiest they ever had been. Their decade-long marriage had survived years of war that took Chris, a U.S. Navy SEAL, away from Taya and their two children for agonizingly long stretches while he put his life on the line in many major battles of the Iraq War. After struggling to readjust to life out of the military, Chris had found new purpose in redirecting his lifelong dedication to service to supporting veterans and their families. Their love had deepened, and, most special of all, their family was whole, finally.

Then, the unthinkable. On February 2, 2013, Chris and his friend Chad Littlefield were killed while attempting to help a troubled vet. The life Chris and Taya fought so hard to build together was shattered. In an instant, Taya became a single parent of two. A widow. A young woman facing the rest of her life without the man she loved.

Chris and Taya’s remarkable story has captivated millions through Clint Eastwood’s blockbuster, Academy Award-winning film American Sniper, starring Bradley Cooper as Chris and Sienna Miller as Taya, and because of Chris’s bestselling memoir, in which Taya contributed passages that formed the book’s emotional core. Now, with trusted collaborator Jim DeFelice, Taya writes in never-before-told detail about the hours, days, and months after his shocking death when grief threatened to overwhelm her. Then there were wearying battles to protect her husband’s legacy and reputation.

And yet throughout, friendship, family, and a deepening faith were lifelines that sustained her and the kids when the sorrow became too much. Two years after her husband’s tragic death, Taya has found renewed meaning and connection to Chris by advancing their shared mission of “serving those who serve others,” particularly military and first-responder families. She and the children now are embracing a new future, one that honors the past but also looks forward with hope, gratitude, and joy.

American Wife is one of the most remarkable memoirs of the year -- a universal chronicle of love and heartbreak, service and sacrifice, faith and purpose that will inspire every reader.

Taya Kyle is executive director of the Chris Kyle Frog Foundation. Chris and Taya’s story was the subject of Clint Eastwood’s blockbuster film American Sniper, starring Bradley Cooper and Sienna Miller. She is a featured speaker on the Patriot Tour, with Marcus Luttrell, David Goggins, and Chad Fleming. Taya is the New York Times bestselling author of American Wife. She lives in Texas.

Jim DeFelice is the co-author, with former U.S. Navy SEAL Chris Kyle, of the multi-million-copy bestseller American Sniper, the source for Clint Eastwood’s film starring Bradley Cooper. His other books include Omar Bradley: General at War; Rangers at Dieppe; and West Like Lightning: The Brief, Legendary Ride of the Pony Express. He lives in upstate New York.

▼▲
I'm the author/artist and I want to review American Wife: A Memoir of Love, War, Faith, and Renewal.
Back
×