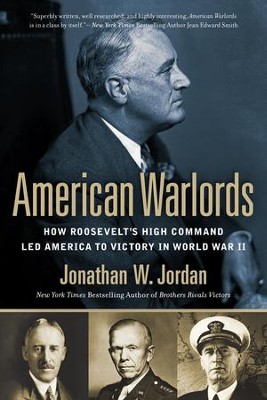 After the attack on Pearl Harbor, the United States was wakened from its slumber of isolationism. To help him steer the nation through the coming war, President Franklin Roosevelt turned to the greatest "team of rivals" since the days of Lincoln: Secretary of War Henry Stimson, Admiral Ernest J. King, and General George C. Marshall.

Together, these four men led the nation through history’s most devastating conflict and ushered in a new era of unprecedented American influence, all while forced to overcome the profound personal and political differences which divided them.

A startling and intimate reassessment of U.S. leadership during World War II, American Warlords is a remarkable glimpse behind the curtain of presidential power.

▼▲
"An incredibly intimate account of the four men who led the nation to victory in the Second World War. Mr. Jordan's book should be required reading for all who seek greater insight into how wars are won. Superbly written, well researched, and highly interesting, American Warlords is in a class by itself."—Jean Edward Smith, Pulitzer Prize Finalist, Winner of the Francis Parkman Prize, and New York Times Bestselling Author of FDR and Eisenhower in War and Peace

"[A] triumph of meticulous scholarship and keen insight propelled by a marvelously written narrative&hellip;Jordan’s American Warlords accomplishes for FDR and World War II what Doris Kearns Goodwin’s Team of Rivals achieved for Lincoln and the Civil War."—Armchair General

"A page-turning chronicle of World War II...Throughout, the author provides astute and clever portrayals of the leaders, including Churchill's pretense to his ancestor's abilities, Stalin's displays of compassion, and FDR's meddling in naval projects...Readers will enjoy the intrigue, back-stabbing, action, and diplomacy in this well-written book."—Kirkus Reviews (starred review)

"A classic page-turner that is fun to read. This essential volume will hold much appeal to readers interested in World War II, FDR, and civilian-military relations."—Library Journal (starred review)

"Mr. Jordan has done an admirable job of making these men come alive. He uses their own words to weave a good tale."—The Wall Street Journal

"Jordan has crafted an immensely readable history of World War II, framed around President Franklin Roosevelt and his top military lieutenants&hellip;Jordan has done a wonderful job of encapsulating, not just the personalities of these fascinating leaders, but the larger overall strategy of the war, dutifully covering all the major battles on the road to victory."—Charleston Post and Courier

"Jordan’s research is exemplary; the detail he brings forth about the men of this time and the conflicts they faced, both outside Washington and inside, paints a picture of a small group of men who understood only too well what was happening on both sides of their world. They are presented in such a way as to be human on the one hand and almost superhuman on the other&hellip;. A must-read."—New York Journal of Books

"Perhaps the most compelling stories here are of the historical turns that almost, but didn’t, happen—Marshall as commander of Overlord, Dewey as president, the Morgenthau Plan (to reduce postwar Germany to a meek agrarian state) rather than the Marshall Plan—each of them near misses that would have recast history."—MHQ: The Quarterly Journal of Military History

▼▲
I'm the author/artist and I want to review American Warlords: How Roosevelt's High Command Led America to Victory in World War II - eBook.
Back
Back