Skip to main content
SPRING CYBER EVENT STARTS NOW: And it's a really BIG deal! Up to 88% off through 5/24>
American Violence - eBook
By: Richard Hofstadter
Stock No: WW26307EB 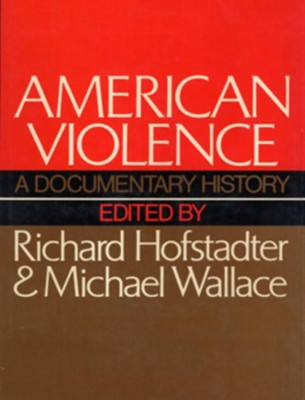 ▼▲
With eyewitness accounts and contemporary reports—linked together by succinct analytical commentaries—Richard Hofstadter and his young collaborator, Michael Wallace, have created a superb documentary reader that is, in effect, a history of violence in America through four centuries.
Here, as experienced by men and women who lived through them, are not only the familiar, chilling eruptions—Harper’s Ferry; the Civil War draft riot in New York; Homestead; Centralia; the Detroit ghetto; the assassinations of Lincoln, Malcolm X, and Robert Kennedy—but also less commonly remembered episodes, such as the New York slave riots of 1712, the doctors’ riot of 1788, vigilante terror in Montana, the anti-Chinese riot in Los Angeles in 1871, and the White League coup d’&eacute;tat of 1874 in New Orleans.
In his extensive introduction, Richard Hofstadter shows how, in the face of the record, Americans have had an extraordinary ability to persuade themselves that they are among the best-behaved and the best-regulated of peoples.  With more than one hundred entries, the editors have documented and put into perspective the thread of violence in American history whose rediscovery—as Hofstadter suggests—will undoubtedly be one of the most important intellectual legacies of the 1960’s.  The book clearly demonstrates, even as the reader comes to grips with long-eluded truths, that America’s consistent history of violence has not yet breached beyond hope of restoration our long record of basic political stability, that most social reforms in the United States have been brought about without violence.

▼▲
Richard Hofstadter, DeWitt Clinton Professor of American History at Columbia University, was born in Buffalo, New York, in 1916.  He received his B.A. from the University of Buffalo and his M.A. and Ph.D. from Columbia University, where he was awarded a William Bayard Cutting Traveling Fellowship for 1941-2.  He taught at the University of Maryland from 1942 until 1946, when he joined the history department at Columbia.  He has lectured widely at colleges and universities in the United States and Great Britain, and in 1958-9 served as Pitt Professor of American History and Institutions at Cambridge University.  The first of his books on American history was Social Darwinism in American Thought, published in 1944, followed by The American Political Tradition (1948).  The Age of Reform (1955) won the Pulitzer Prize in history, and Anti-Intellectualism in American Life (1963) received the Pulitzer Prize in general nonfiction, the Emerson Award of Phi Beta Kappa, and the Sidney Hillman Prize Award.  Other books include The Paranoid Style in American Politics (1965), The Progressive Historians (1968), and The Idea of a Party System (1969).

Michael Wallace, a native of New York City, was graduated from Columbia College in 1964.  As a graduate student in American history at Columbia University he has been a President’s Fellow and a Herbert H. Lehman Fellow.  He has contributed articles to The American Historical Review and American Scholar.

▼▲
I'm the author/artist and I want to review American Violence - eBook.
Back
Back