Skip to main content
SPRING CYBER EVENT STARTS NOW: And it's a really BIG deal! Up to 88% off through 5/24>
Hope Runs: An American Tourist, a Kenyan Boy, a Journey of Redemption - eBook
By: Claire Diaz-Ortiz, Sammy Ikua Gachagua
Stock No: WW49936EB 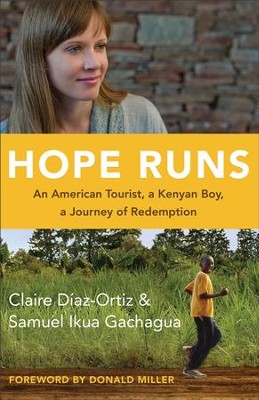 Hope Runs: An American Tourist, a Kenyan Boy, a Journey of Redemption - eBook

▼▲
Sammy Ikua Gachagua had lost his father to illness, his mother to abandonment, and his home to poverty. By age ten, he was living in a shack with seven other children and very little food. He entered an orphanage seeing it as a miracle with three meals a day, a bed to sleep in, and clothes on his back.

When Claire Diaz-Ortiz arrived in Kenya at the end of an around-the-world journey, she decided to stay the night, climb Mt. Kenya, then head back home. She entered an orphanage seeing it as little more than a free place to spend the night before her mountain trek.
God had other plans.

▼▲
Claire Diaz-Ortiz leads social innovation at Twitter, Inc., and is the author of several books, including Twitter for Good: Change the World One Tweet at a Time. Named one of the 100 Most Creative People in Business by Fast Company, she is a frequent international speaker on social media, business, and innovation and writes a popular business blog at www.clairediazortiz.com. She holds an MBA from Oxford University and an MA and BA in anthropology from Stanford University. She is cofounder of Hope Runs, a non-profit organization operating in AIDS orphanages in Kenya. Claire has been called a "mover and shaker" by Mashable, "the woman who got the pope on Twitter" by The Washington Post, a "force for good" by Forbes, and "one of the most generous in social media" by Fast Company. She has been widely written about in such publications as the New York Times, Business Week, The Washington Post, and Forbes. Find her on Twitter @claire.

Sammy Ikua Gachagua was born in rural Kenya in 1992. After losing his family at a young age, he struggled to survive until he was placed in an orphanage in Nyeri, Kenya. In 2009 he received a full-ride scholarship to Maine Central Institute, granting him a rare US visa and the chance to begin his sophomore year of high school under the guardianship of Claire Diaz-Ortiz. He is an up-and-coming motivational speaker. Find him on Twitter @sammyikua.

▼▲
I'm the author/artist and I want to review Hope Runs: An American Tourist, a Kenyan Boy, a Journey of Redemption - eBook.
Back
Back