Skip to main content
SPRING CYBER EVENT STARTS NOW: And it's a really BIG deal! Up to 88% off through 5/24>
The Making of an American Thinking Class: Intellectuals and Intelligentsia in Puritan Massachusetts
By: Darren Staloff
Stock No: WW149821 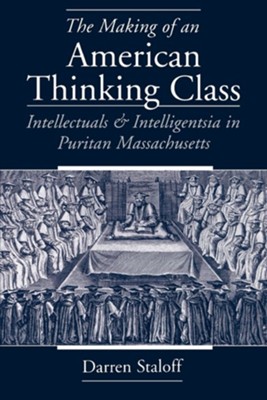 The Making of an American Thinking Class: Intellectuals and Intelligentsia in Puritan Massachusetts

▼▲
A radical new interpretation of the political and intellectual history of Puritan Massachusetts, The Making of an American Thinking Class envisions the Bay colony as a seventeenth century one-party state, where congregations served as ideological 'cells' and authority was restricted to an
educated elite of ministers and magistrates. From there Staloff offers a broadened conception of the interstices of political, social, and intellectual authority in Puritan Massachusetts and beyond, arguing that ideologies, as well as ideological politics, are produced by self-conscious, and often
class-conscious, thinkers.

Darren Staloff is Assistant Professor of History at City College of New York.

▼▲
"An invigorating contribution to the scholarly literature on Puritan New England--original in perspective, forceful in argument, and graceful in presentation. In Staloff's sophisticated retelling, the emergence to authority in Massachusetts of certain intellectuals (clergymen) and intelligentsia
(magistrates) as a 'thinking class' shaped the Puritan stronghold's politics and cultural life until 1686. By reading the sources with an uncommonly keen eye for the nuances of power, Staloff sheds new light on many heretofore slighted aspects of Massachusetts history as well as such old chestnuts
as the banishing of Roger Williams, the squelching the Quakers, and the jousting over the Halfway Covenant. [Staloff] also offers perceptive new assessments of the Bay Colony's major personalities, including John Cotton, Thomas Hooker, and Increase Mather. Old hands at Puritan studies as well as
newcomers to the field will profit immensely from this insightful book."--Alden T. Vaughan, Columbia University
"In all probability, [Staloff's book] will quickly become the one book that everyone will read and assign to get into the mind and culture of Puritan New England."--John M. Murrin, Princeton University
"Darren Staloff's analytical categories of class and power provide the structure for what is both an excellent social history of political conflicts and a useful political history of religious events. His account gives new, provocative twists to old stories like the Hutchinson trial, disputes over
the charter, and the Halfway Covenant...Staloff's dramatic and nuanced narrative reveals not only the interplay of class and power but also the considerable influence of personalities and ideas."--illiam and Mary Quarterly
"It offers a genuinely ironical way to understand the New England Puritans' lurch into modernity, a topic of neverending interest to scholars in this field."--Reviews in American History
"Staloff presents a provocative argument. It is a thoughtful, intelligent work, one that considers the Puritan elite as dynamic and self-interested. The book is certain to rekindle interest (if it ever died out) in the intellectual history of the Puritans in New England and show us how we can use
innovations from other fields, such as sociology, to refine our thinking about history."--The New England Quarterly
"Darren Staloff's compact, closely reasoned book provides the best account to date of the institutional means by which the values of Protestant Christianity, whether contained in the Calvinist Federal Theology or the biblicism of the primitive churches, grew to power in Massachusetts, became
pervasive, and then waned...To Staloff's great credit, one finishes his book convinced that such notoriously slippery yet monolithic terms as 'the intelligentsia' or 'thinking class' were, in the instance of the seventeenth-century Massachusetts, both identifiable and accurate."--Early American
Literature

▼▲
I'm the author/artist and I want to review The Making of an American Thinking Class: Intellectuals and Intelligentsia in Puritan Massachusetts.
Back