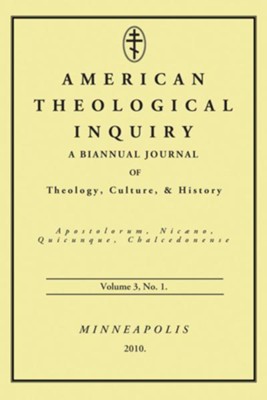 ▼▲
American Theological Inquiry (ATI) reaches thousands of Christian scholars, clergy, and other interested parties, primarily in the U.S. and U.K. The journal was formed in 2007 by Gannon Murphy (PhD Theology, Univ. Wales, Lampeter; Presbyterian/Reformed) and Stephen Patrick (PhD Philosophy, Univ. Illinois; Eastern Orthodox) to open up space for Christian scholars who affirm the Ecumenical Creeds to contribute research throughout the broader Christian scholarly community in America and the West. The purpose of ATI is to provide an inter-tradition forum for scholars who affirm the historic Ecumenical Creeds of Christendom to constructively communicate contemporary theologies, developments, ideas, commentaries, and insights pertaining to theology, culture, and history toward reforming and elevating Western Christianity. ATI seeks a critical function as much or more so as a quasi-ecumenical one. The purpose is not to erase or weaken the distinctives of the various ecclesial traditions, but to widen the dialogue and increase inter-tradition understanding while mutually affirming Christ's power to transform culture and the importance of strengthening Western Christianity with special reference to Her historic, creedal roots. ""Theologians, would-be theologians, and the theologically attentive will want to check out American Theological Inquiry."" Richard John Neuhaus (1936-2009), First Things Gannon Murphy holds a Ph.D. in Theology from the University of Wales, Lampeter, and an M.A. in Theological Studies from Bethel Theological Seminary. He is the author of Voices of Reason in Christian History: The Great Apologists, Their Lives and Legacies.

▼▲
I'm the author/artist and I want to review American Theological Inquiry, Volume Three, Issue One.
Back