We are OPEN and SHIPPING - click here for shipping estimates
PRE-SUMMER CYBER SALE EXTENDED thru 6/1 ~ Over 2,500 items up to 90% off
American Slavery As It Is
By: Theodore Dwight Weld 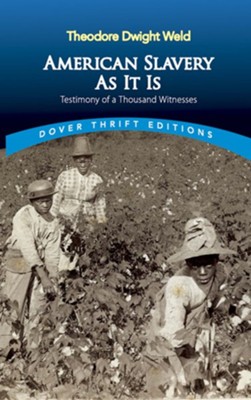 American Slavery As It Is

By: Theodore Dwight Weld
More in Dover Thrift Editions Series
Dover Publications / 2017 / Paperback
Write a Review
Expected to ship on or about 06/27/20.
Stock No: WW819266

▼▲
The stories of hundreds of African Americans who lived in bondage are preserved in this powerful 1839 chronicle. Compiled by a prominent abolitionist, the accounts include personal narratives from freed slaves as well as testimonials from active and former slave owners, presenting a condemnation of slavery from both those who experienced it and those who perpetuated it. Detailing the overall conditions of slaves across multiple states and several years, the book includes information on their diet, clothing, housing, and working hours as well as their punishments and suffering.
Connecticut farmer-turned-abolitionist Theodore Dwight Weld (1803–1895) was a central leader of the American Anti-Slavery Society and traveled the country lecturing against slavery. Weld took great pains to document the trustworthiness of contributors to American Slavery so that there could be no doubt as to its authenticity. A major influence on Harriet Beecher Stowe's Uncle Tom's Cabin, the book sold 100,000 copies in its first year of publication and remains a valuable historical testament. This edited selection presents these powerful first-person accounts to a new generation.

▼▲
Connecticut farmer-turned-abolitionist Theodore Dwight Weld (1803–1895) was a central leader of the American Anti-Slavery Society and traveled the country lecturing against slavery. His work in compiling the testimony of those who had experienced life in bondage was a major influence on Harriet Beecher Stowe's Uncle Tom's Cabin.

▼▲
I'm the author/artist and I want to review American Slavery As It Is.
Back
×