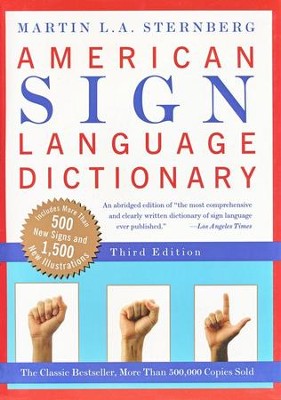 By: Martin Sternberg
HarperCollins / 1998 / Paperback
Write a Review
In Stock
Stock No: WW36345

▼▲
An illustrated abridgment of the most authoritative reference book on sign language, with well-written and easily understood instructions for the use of each sign. More than 5,000 signs and 8,000 illustrations. And now includes more than 500 new signs and 1,500 new illustrations.

Deaf since the age of seven, Martin L. A. Sternberg, Ed.D., spent most of his career working with deaf people. Inspired by his sign language teacher at Gallaudet University in Washington, DC, he devised this vital reference to help anyone learn to speak with their hands.

A must for parents, instructors, and students, American Sign Language Dictionary includes  everything you need to know to communicate clearly using ASL. This illustrated abridgment of the most authoritative reference book on sign language features more than 5,000 signs and 8,000 illustrations, as well as clear, detailed instructions to help you master each sign.

▼▲
Martin L. A. Sternberg, Ed.D., is a native New Yorker. Deaf since the age of seven, he has spent most of his career working with deaf people. The idea for this book came from Dr. Elizabeth Peet, Dr. Sternberg's sign language teacher at Gallaudet University (for the deaf), in Washington, DC. Dr. Sternberg kept Dr. Peet's ideas and methods, but expanded the work greatly. Early work on the project received a federal grant from the U.S. Department of Health, Education and Welfare to New York University, the sponsoring institution. A graduate of the City College of New York, American University, and New York University, Dr. Sternberg has enjoyed a distinguished career as a teacher at Gallaudet, New York, Hofstra, and Adelphi Universities. HE is currently chairman of the board of trustees of Lexington School for the Deaf and Lexington Center for the Deaf. He is the author of four ASL dictionaries and a Codies Award-winning CD-ROM, all published by HarperCollins. He also received Emmy and Peabody nominations for his ASL series by the NBC network, "Speaking With Your Hands," as well as medals at various international film and television festivals.

▼▲
I'm the author/artist and I want to review American Sign Language Dictionary, Revised.
Back
Back