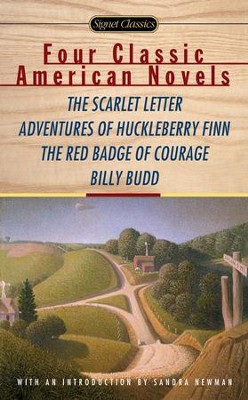 ▼▲
Shining examples of American literature at its best, these four novels explore timeless themes—adventure, war, sex, and morality—through compelling narratives. An adulteress, a runaway boy, a terrified soldier, and a maltreated sailor—the heroes of these novels have become a part of popular culture. This indispensable volume includes…

With an Introduction by Sandra Newman

▼▲
Nathaniel Hawthorne was born on July 4, 1804, in Salem, Massachusetts. In 1825 he graduated from Bowdoin College in Maine, and he returned to Salem determined to become a writer of short stories. For the next twelve years he was plagued with unhappiness and self-doubts as he struggled to master his craft. He finally secured some small measure of success with the publication of Twice-Told Tales (1837). The Scarlet Letter (1850), which brought him immediate recognition, was followed by The House of the Seven Gables (1851). After serving four years as the American Consul in Liverpool, England, he traveled in Italy; he returned home to Massachusetts in 1860. He died on May 19, 1864, at Plymouth, New Hampshire.

Mark Twain was born Samuel Langhorne Clemens in Florida, Missouri, in 1835, and died at Redding, Connecticut in 1910. In his person and in his pursuits he was a man of extraordinary contrasts. Although he left school at twelve when his father died, he was eventually awarded honorary degrees from Yale University, the University of Missouri, and Oxford University. His career encompassed such varied occupations as printer, Mississippi riverboat pilot, journalist, travel writer, and publisher. He made fortunes from his writing but toward the end of his life he had to resort to lecture tours to pay his debts. He lives in American letters as a great artist, the writer whom William Dean Howells called “the Lincoln of our literature.”

Stephen Crane was born in 1871 in Newark, NJ, the youngest of fourteen children. He wrote Maggie: A Girl of the Streets while an undergraduate at Syracuse University. In 1895 he achieved acclaim for The Red Badge of Courage, hailed as the epitome of war stories, although he had never seen battle. An active journalist, he reported from Greece and Cuba in addition to being an acclaimed novelist. He died of tuberculosis in Germany in 1900.

Herman Melville was born in August 1, 1819, in New York City, the son of a merchant. Only twelve when his father died bankrupt, Melville tried work as a bank clerk, as a ship's cabin-boy, and as an elementary schoolteacher, before shipping out in 1841 on a whaler bound for the Pacific. Deserting ship the following year in the Marquesas, he made his way to Tahiti and Honolulu, returning as ordinary seaman on a frigate to Boston, where he was discharged in October 1844. Books based on these adventures won him immediate success. By 1850 he was hard at work on his masterpiece Moby-Dick. Literary success soon faded; his complexity increasingly alienated readers. In 1863, during the Civil War, he moved back to New York City, where from 1866-1885 he was a deputy inspector in the Custom House, and where, in 1891, he died. A draft of a final prose work, Billy Budd, Sailor, was left unfinished and was packed away by his widow, where it remained until its rediscovery and publication in 1924.

Sandra Newman is the author of many works of fiction and nonfiction, including The Country of Ice Cream Star. She has taught writing and literature at Temple University, Chapman University, and the University of Colorado, and she has published fiction and nonfiction in Harper’s, Granta, and London’s Observer, Telegraph, and Mail on Sunday newspapers, among other journals and newspapers.

▼▲
I'm the author/artist and I want to review Four Classic American Novels: The Scarlet Letter, Adventures of Huckleberry Finn, The RedBadge Of Courage, Billy Budd - eBook.
Back
Back