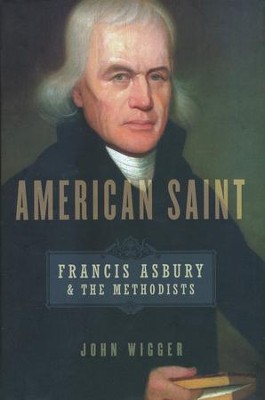 ▼▲
Definitive! Asbury single-handedly guided the creation of the Methodist church, which became the largest Protestant denomination in 19th-century America, laying the foundations for today's holiness and Pentecostal movements. His gift for organization, life of prayer, cultural sensitivity, and concern for the average Joe were legendary. 544 pages, hardcover.

▼▲
English-born Francis Asbury was one of the most important religious leaders in American history. Asbury single-handedly guided the creation of the American Methodist church, which became the largest Protestant denomination in nineteenth-century America, and laid the foundation of the Holiness and Pentecostal movements that flourish today. John Wigger has written the definitive biography of Asbury and, by extension, a revealing interpretation of the early years of the Methodist movement in America. Asbury emerges here as not merely an influential religious leader, but a fascinating character, who lived an extraordinary life. His cultural sensitivity was matched only by his ability to organize. His life of prayer and voluntary poverty were legendary, as was his generosity to the poor. He had a remarkable ability to connect with ordinary people, and he met with thousands of them as he crisscrossed the nation, riding more than one hundred and thirty thousand miles between his arrival in America in 1771 and his death in 1816. Indeed Wigger notes that Asbury was more recognized face-to-face than any other American of his day, including Thomas Jefferson and George Washington.

John Wigger is Associate Professor of History at the University of Missouri.

"Undeniably the most comprehensive and scholarly biography of Francis Asbury written in more than a century, John Wigger's American Saint fills a major gap in the historiography of American religion. This lively and well-researched narrative that includes more than one hundred pages of endnotes superbly expresses the character of a British immigrant from a working-class heritage whose labors significantly transformed the religious landscape of postrevolutionary America." --Terry D. Bilhartz, The Journal of American History
"Splendid..."--Mark Noll, Christian Century
"an amazing new book..." -- David Crumm, Read the Spirit

"Francis Asbury had an immense influence in shaping the early American Republic in that he promoted and oversaw the phenomenal growth of the fledgling Methodist movement at a rate that would soon make it America's largest Protestant denomination. John Wigger provides a definitive and illuminating biography that is to be recommended to all who wish to understand the sort of leadership that makes great religious movements succeed."

"Francis Asbury was one of the three or four most important religious leaders in American history, but until now he has lacked a comprehensive biography. John Wigger fills this gap splendidly. But much more than filling a gap, Wigger's rich account of the man who created American Methodism as the marvel of its age also reveals a great deal about the United States in its formative decades. This is a terrific book on a major figure."

--Mark A. Noll, Author of America's God: From Jonathan Edwards to Abraham Lincoln

"Wigger's superbly researched and clearly written biography deservedly rehabilitates one of America's unlikeliest but most significant religious leaders. From his humble beginnings in England, Francis Asbury probably did more to reshape the religious culture of the new Republic than any other individual."

--David Hempton, Author of Methodism: Empire of the Spirit

"Wigger's biography does much more than simply satisfy a decades-old call for a critical biography of Asbury and refute simplistic and outdated characterizations of the man, though. It challenges common assumptions about religious leadership in American history...This is an important contribution to American religious history."


"[An] informative, comprehensive biography of Francis Asbury ... [A] well-crafted biography that brings Asbury into sharper focus and elevates his status within the pantheon of major religious leaders in the US...Recommended."

--Choice
"At least thirteen biographies of Asbury have been published since 1852. John Wigger's volume is the first one that fully meets the requirements of academic scholarship, yet its graceful prose will make it accessible to a wide audience."

"Asbury has not lacked for biographies, but Wigger's is definitive and magisterial."

--Christian Century
"Wigger has contributed a biography of a holy man which is not, for all that, hagiographical. This is no small achievement, but in the process, he also turns much of what we knew about that man and his cultural context on its head."
--Evangelical Studies Bulletin
"This biography will no doubt stand for some time as the definitive treatment of Asbury's life."
-- Journal of the Early Republic

"[A] first-rate biography. . .Asbury has not lacked for biographies, but Wigger's is definitive and magisterial."--The Christian Century
"We can be grateful for Wigger's sensitive portrait of a Christian who until now was among the most elusive in American religious history, but who inspires awe for his subtlety, his austerity, and his humility."--Church History

▼▲
I'm the author/artist and I want to review American Saint: Francis Asbury & the Methodists.
Back
×
Back
×