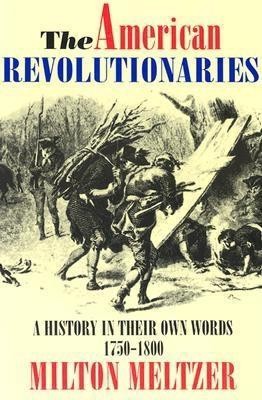 The American Revolutionaries: A History in Their Own Words 1750-1800

Learn about the American Revolutionary War directly from those who lived through it in this young adult nonfiction book from Milton Meltzer, Boston Globe–Horn Book Award Honoree and winner of the Laura Ingalls Wilder Medal.

Most of us know about the American Revolution from only secondhand accounts of the fighting or from documents such as the Declaration of Independence and the Bill of Rights. But listen closely and you can hear the voices—those that tell the truest stories—of those who experienced this devastating war firsthand.

From a humble shoemaker who hears the bells ringing at Lexington and responds to a call to battle to George Washington’s aide who recounts his feelings as he crosses the Delaware to a surgeon who writes about the horrors of smallpox, frostbite, and starvation that plague soldiers at an army camp—these are the voices of the American Revolutionaries.

The dozens of people, of all races, featured in this book are the ones that planted the seeds of liberty and passionately struggled to give birth to the United States of America that we know today.

▼▲
I'm the author/artist and I want to review The American Revolutionaries: A History in Their Own Words 1750-1800.
Back