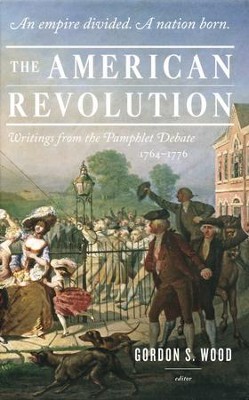 The American Revolution: Writings from the Pamphlet Debate is a two-volume series covering the years 1764-1772 and 1773-1776. Both volumes come in a handsome hardcover slipcase that features the painting Pulling Down the Statue of George III at Bowling Green in Lower Manhattan (1857) by William Walcutt.

This set features primary documents written by both Americans and British people for and against the new republic in the run-up to the American Revolution. Writings from Thomas Jefferson, Charles Lee, Samuel Seabury, Philip Livingston, Thomas Hutchinson, Thomas Paine, Silas Downer, William Hicks, William Knox, and others are included.

Part of the Library of America series, these books are designed to last for generations. They feature acid-free paper and are bound with the grain of the paper to ensure they open easily and lie flat without crinkling or buckling. The page layout has been designed for clarify with the easy-to-read Galliard typeface. Pages are smyth-sewn and volumes include a ribbon marker. Hardcovers with dust jacket.

▼▲
For the 250th anniversary of the start of the American Revolution, acclaimed historian Gordon S. Wood presents a landmark collection of British and American pamphlets from the political debate that divided an empire and created a nation: In 1764, in the wake of its triumph in the Seven Years War, Great Britain possessed the largest and most powerful empire the world had seen since the fall of Rome and its North American colonists were justly proud of their vital place within this global colossus. Just twelve short years later the empire was in tatters, and the thirteen colonies proclaimed themselves the free and independent United States of America. Now, for the 250th anniversary of the Stamp Act Crisis, the momentous upheaval that marked the beginning of the American Revolution, Pulitzer Prize–winning historian Gordon S. Wood presents a landmark two-volume edition of the political debate that led to the Declaration of Independence.

This unprecedented collection gathers in two authoritative Library of America volumes the complete texts of thirty-nine of the most fascinating and influential British and American pamphlets of the period: inexpensive, widely circulated works that were the instant media of their day, ideal for the rapid exchange of ideas. In the first volume a controversy about the origin and function of colonies quickly becomes a deeper dispute over the nature of political liberty itself, in which Massachusetts lawyer James Otis boldly asserts the colonists’ natural rights; Benjamin Franklin gives dramatic testimony against the Stamp Act before the House of Commons; John Dickinson calls for collective action in the famous Letters from a Farmer in Pennsylvania; and the so-called "Boston Pamphlet," written by Samuel Adams and others, turns the focus of debate to the question of sovereignty, setting the stage for the final crisis to come. In the second volume Thomas Jefferson advances a vision of a radically new kind of empire in the work that first made him famous; Joseph Galloway presents an ingenious but ill-fated plan for preserving union with Great Britain; Samuel Johnson gives vent to his deep animus for the Americans and their pretensions to liberty; Edmund Burke makes an eloquent case for reconciliation before it’s too late; and Thomas Paine, in the truly revolutionary Common Sense, proclaims that the "birthday of a new world is at hand."

Prepared by the nation’s leading historian of the American Revolution, each volume includes an introduction, headnotes, biographical notes about the writers, a chronology charting the rise and fall of the first British empire, a textual essay describing the production, reception, and influence of each work, and detailed explanatory notes. As a special feature, the set also features typographic reproductions of the pamphlets’ original title pages.

▼▲
GORDON S. WOOD is Alva O. Way Professor of History Emeritus at Brown University. His books include the Pulitzer Prize-winning The Radicalism of the American Revolution, the Bancroft Prize-winning The Creation of the American Republic, 1776–1787, The Americanization of Benjamin Franklin, The Purpose of the Past: Reflections on the Uses of History, and Empire of Liberty: A History of the Early Republic, 1789–1815, for the Oxford History of the United States. He writes frequently for The New York Review of Books, among other publications. In 2011 Wood was awarded the National Humanities Medal by President Barack Obama.

▼▲
"This collection of pamphlets from the American Revolution is timely, important, and judiciously selected, which is no surprise given that Gordon S. Wood is the most insightful and accomplished scholar of the intellectual origins and consequences of the Revolution. These volumes are a great and fitting addition to the Library of America series."

— Alan Taylor, winner of the 2014 Pulitzer Prize for History

"Gordon S. Wood’s grasp of the dynamics of the Imperial debate that culminated in American independence is unsurpassed.  By including all sides of the controversy Wood has created the most discriminating and revealing collection of sources we have on the emerging ideology of the Revolution."

"These volumes make a valuable contribution to the learning and teaching of American history. The men who wrote the script for national independence were strong, daring thinkers and skilled writers, with their lives at stake and their conscience in their pens. Their great gift to us lives on in this splendid collection."

▼▲
I'm the author/artist and I want to review The American Revolution: Writings from the Pamphlet Debate, 1764 - 1776, 2-Volume Boxed Set.
Back
Back