BIG SUMMER BLOWOUT: 3 Days Only! Save up to 90% thru Wednesday. Shop now >
American Revolution For Dummies
By: Steve Wiegand 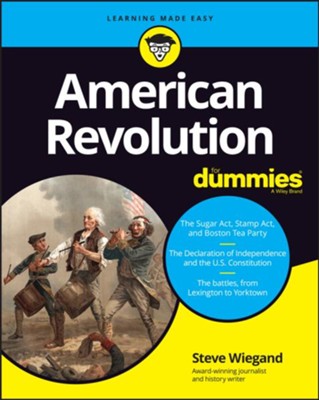 By: Steve Wiegand
More in For Dummies Series
For Dummies / 2019 / Paperback
Write a Review
In Stock
Stock No: WW593492

Become an expert on the Revolutionary War

American Revolution For Dummies capitalizes on the recent resurgence of interest in the Revolutionary War period—one of the most important in the history of the United States. From the founding fathers to the Declaration of Independence, and everything that encapsulates this extraordinary period in American history, American Revolution For Dummies is your one-stop guide to the birth of the United States of America.

Understanding the critical issues of this era is essential to the study of subsequent periods in American history &hellip; and this book makes it more accessible than ever before.

If you want or need to become more knowledgeable about the American War of Independence and the people and period surrounding it, this book gives you the information necessary to become an expert on the essential details of the revolutionary period.

Steve Wiegand is an award- winning journalist and history writer. During his 35-year career at the San Diego Evening Tribune, San Francisco Chronicle, and Sacramento Bee, he interviewed several U.S. presidents and governors. He is also the author of U.S. History For Dummies.

▼▲
I'm the author/artist and I want to review American Revolution For Dummies.
Back
×