Skip to main content
An Artist of the American Renaissance: The Letters of Kenyon Cox, 1883-1919 / Digital original - eBook
Edited By: H. Wayne Morgan
By: H.Wayne Morgan(Ed.)
Stock No: WW51694EB 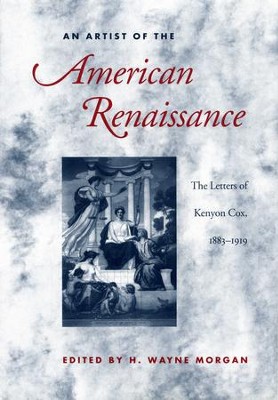 An Artist of the American Renaissance: The Letters of Kenyon Cox, 1883-1919 / Digital original - eBook

▼▲
Kenyon Cox was born in Warren, Ohio, in 1856 to a nationally prominent family.  He studied as an adolescent at the McMicken Art School in Cincinnati and later at the Pennsylvania Academy of Fine Arts in Philadelphia.  From 1877 to 1882, he was enrolled at the Ecole des Beaux Arts in Paris, and then in 1883 he moved to New York city, where he earned his living as an illustrator for magazines and books and showed easel works in exhibitions.  He eventually became a leading painter in the classical style—particularly of murals in state capitols, courthouses, and other major buildings—and one of the most important traditionalist art critics in the United States.An Artist of the American Renaissance is a collection of Cox’s private correspondence from his years in New York City and the companion work to editor H. Wayne Morgan’s An American Art Student in Paris:  The Letters of Kenyon Cox, 1877-1882 (Kent State University Press, 1986).  These frank, engaging, and sometimes naïve and whimsical letters show Cox’s personal development as his career progressed.  They offer valuable comments on the inner workings of the American art scene and describe how the artists around Cox lived and earned incomes.  Travel, courtship of the student who became his wife, teaching, politics of art associations, the process of painting murals, the controversy surrounding the depiction of the nude, promotion of the new American art of his day, and his support of a modified classical ideal against the modernism that triumphed after the 1913 Armory Show are among the subjects he touched upon.Cox’s letters are little known and have never before been published.  This collection will appeal to those with an interest in late-19th-century American architecture, art and culture, mural painting, art criticism and the history of Ohio.

▼▲
I'm the author/artist and I want to review An Artist of the American Renaissance: The Letters of Kenyon Cox, 1883-1919 / Digital original - eBook.
Back
Back