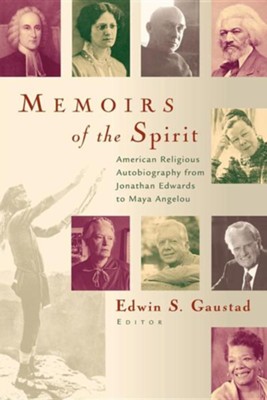 Memoirs of the Spirit: American Religious Autobiography from Jonathan Edwards to Maya Angelou

▼▲
Offering a fascinating entry in the study of American religious experience during the past three centuries, this collection of 26 spiritual autobiographies uniquely captures the nation's soul in the words of the people who helped shape it. Contributors include Reinhold Niebuhr, Paramahansa Yogananda, Mary McCarthy, Thomas Merton, Alan Watts, Jimmy Carter, Maya Angelou, and others.

▼▲
Edwin S. Gaustad (1923–2011) was professor emeritus of history and religious studies at the University of California, Riverside.

▼▲
Library Journal
"This striking anthology of poignant extracts from American autobiographies embraces the full range of religions that have found a place in this country. Authors include Frederick Douglass, Harry Emerson Fosdick, Thomas Merton, and Maya Angelou. Gaustad has made a skillful selection and, like any good anthologist, whets our appetite for more."

Publishers Weekly
"Gaustad—emeritus professor of history and religion at UC Riverside and author of several sweeping narratives, an atlas and other primary-source readers on American religious history—strikes gold again with this diverse collection of 26 spiritual autobiographies. . . Some of the 20th-century selections are refreshingly unconventional. . . Gaustad's use of such unpredictable selections demonstrates that American spirituality transcends religious institutions to encompass politics, economics, and other arenas of 'secular' America. Moreover, the inclusivity of his choices should make this a popular text for survey courses in American religion. Full-page photographs complement Gaustad's witty introductions to each author."

Calvin Theological Journal
"The value of this book is that it provides under one cover a valuable introduction and collection of a broad cross section of American religion. This resource could be used both in academic settings and personal devotions. Further it illustrates a variety of means and how other Christian pilgrims and seekers have wrestled with and expressed their own spiritual journeys."

MultiCultural Review
"Many social scientists have wondered why weekly attendance at religious services remains high in the United States while it has declined significantly in most other Western countries. Those seeking to understand this phenomenon would do well to consult Gaustad's beautiful collection of American religious autobiographies. This anthology reveals the depth and diversity of the American religious experience across a time span of more than three centuries and shows in subtle ways the special place held by religion and spirituality. . . . Memoirs of the Spirit, which presents American experiences from liberal and conservative Protestants, Catholics, Jews, Hindus, Buddhists, and other faith traditions, offers a truly diverse and multicultural view of America's historical and contemporary religious spirit. Highly recommended."

▼▲
I'm the author/artist and I want to review Memoirs of the Spirit: American Religious Autobiography from Jonathan Edwards to Maya Angelou.
Back