Skip to main content
American Priestess: The Extraordinary Story of Anna Spafford and the American Colony in Jerusalem - eBook
By: Jane Geniesse
Stock No: WW10933EB 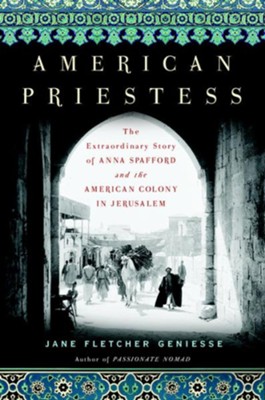 American Priestess: The Extraordinary Story of Anna Spafford and the American Colony in Jerusalem - eBook

▼▲
For generations, The American Colony Hotel in Jerusalem has been a well-known retreat for journalists, diplomats, pilgrims and spies. However, few know the story of Anna Spafford, the enigmatic evangelist who was instrumental in its founding

Branded heretics by Jerusalem’s established Christian missionaries when they arrived in 1881, the Spaffords and their followers nevertheless won over Muslims and Jews with their philanthropy. But when her husband Horatio died, Anna assumed leadership, shocking even her adherents by abolishing marriage and establishing an uneasy dictatorship based on emotional blackmail and religious extremism.

With a controversial heroine at its core, American Priestess provides a fascinating exploration of the seductive power of evangelicalism as well as an intriguing history of an enduring landmark.

▼▲
JANE FLETCHER GENIESSE, a former reporter for the New York Times, researched American Priestess for seven years. Her biography of Freya Stark, Passionate Nomad, was a New York Times Notable Book and a finalist for the PEN/Martha Albrand Award. She lives in Florida and Washington, D.C.

▼▲
Anna Øglende Spaffords life was a classic 19th-century epic, related perceptively by Geniesse. Born in Norway in 1842, she came to the United States as a child, buried her father on the Minnesota prairie, then married evangelical lawyer Horatio Spafford in Chicago. Somewhat unhinged by the Great Chicago Fire, bankruptcy and a shipwreck that drowned four of their daughters, the couple founded a Protestant sect called the Saints; hounded by creditors, they absconded to Jerusalem in 1881 with a handful of followers to await the Second Coming. With Horatios death, Anna tightened her grip on her American Colony cult, abolished marriage and reshuffled couples into chaste affinities. Then she turned her sect into a business empire, including a profitable hotel, farms, bakeries and Jerusalems first telephone company, all staffed by Swedish converts. Whew! There are neither villains nor saints in this story, notes Geniesse (Passionate Nomad), setting her sprightly account against the eras Christian Zionism and millennial hysterias. Geniesse paints her charismatic heroine as part ur-feminist survivor, part totalitarian despot. (June 17)Copyright 2008 Reed Business Information.

“Lively. . . . The Jerusalem years have the quality of a Hollywood epic.” –The New York Times Book Review

“A vivid picture of a dedicated cult's search for answers in the Holy Land and of the tense relationships of religious groups in Jerusalem.” –Janet Wallach, author of Desert Queen: The Extraordinary Life of Gertrude Bell

“[A] fascinating story of the Spaffords and their quixotic enterprise.” –The Washington Times

“It is surprising and ironic that although the American Colony Hotel is favored by visiting journalists, none has ever before written a book about its unusual origins. Geniesse has now ably filled that gap.” –The Jerusalem Post

“Geniesse relates a tale that is as sweeping and epic in its scope as anything Edna Ferber wrote. . . . Fantastic.” –Rockland Free Press

“An engaging and enlightening account. . . . The author’s fascinating psychological profiles of Horatio and, especially Anna, dovetail seamlessly with her account of the Overcomers’ rise and inevitable demise.” –Louisville Courier-Journal

“Colorful. . . . A fascinating insight into the upsurge in the late 1800s of ‘pre-millennial’ religious movements. . . . American Priestess is a great read–well written, thoroughly researched, and full of fascinating anecdotes.” –Internet Review of Books

“A vivid portrait of both a woman and a region on the cusp of transformation.” –Booklist

“Geniesse’s prose powerfully re-creates the terrors of shipwreck and of living through fire and war as well as the sights, sounds, and smells of everyday life in Chicago and Old Jerusalem. In Anna Spafford, Geniesse has created a charismatic, complex, and commanding figure as compelling as any fictive heroine.” –Sena Jeter Naslund, author of Ahab’s Wife

▼▲
I'm the author/artist and I want to review American Priestess: The Extraordinary Story of Anna Spafford and the American Colony in Jerusalem - eBook.
Back
Back