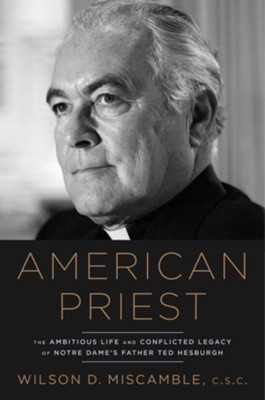 Considered for many decades to be the most influential priest in America, Rev. Theodore M. Hesburgh, played what many consider pivotal roles in higher education, the Catholic Church, and national and international affairs. American Priest examines his life and his many and varied engagements—from the university he led for thirty-five years to his associations with the Vatican and the White House—and evaluates the extent and importance of his legacy.

Author and Notre Dame priest-professor Wilson D. Miscamble tracks how Hesburgh transformed Catholic higher education in the postwar era and explores how he became a much-celebrated voice in America at large. Yet, beyond the hagiography that often surrounds Hesburgh’s legacy lies another more complex and challenging story. What exactly were his contributions to higher learning; what was his involvement in the civil rights movement; and what was the nature of his role as advisor to popes and presidents?

Understanding Hesburgh’s life and work illuminates the journey that the Catholic Church traversed over the second half of the twentieth century. Exploring and evaluating Hesburgh’s importance, then, contributes not only to the colorful history of Notre Dame but also to comprehending the American Catholic experience.

"Excellent . . . the story that Father Miscamble tells is an all-American story—the rise of a Catholic of relatively modest background, close to his immigrant roots, to a place of prominence among the nation’s elite." —Public Discourse

▼▲
REVEREND WILSON D. (BILL) MISCAMBLE, C.S.C., joined the permanent faculty in the History Department at Notre Dame in 1988. He chaired the History Department from 1993 to 1998. He also served as Rector and Superior of Moreau Seminary (2000 to 2004), the principal formation site for the Congregation of Holy Cross in North America. Fr. Miscamble's primary research interests are American foreign policy since World War II and the role of Catholics in 20th-century U.S. foreign relations.

▼▲
"Very few men, clergy or lay, have shaped the American Catholic experience of the last century more powerfully than Notre Dame’s Theodore Hesburgh. Priest, religious, educator, visionary, builder, emissary, celebrity – he inhabited all these roles with exceptional passion, skill, and commensurate ambition. The author captures the complicated genius, and the equally complex times, of Hesburgh the man with exactly the right balance of admiring and critical eye. This is a deep, rich, superbly engaging biography of a force of nature on the post-conciliar American Catholic scene."—Charles J. Chaput, O.F.M. Cap., Archbishop of Philadelphia

"Fr. Wilson Miscamble is uniquely qualified to tell the story of the legendary Fr. Hesburgh. Balanced, thorough, and gracefully written, this remarkable biography will be of interest to anyone who wants more fully to understand American Catholicism in the twentieth century."—Robert Barron, Auxiliary Bishop of Los Angeles and author of To Light a Fire on the Earth

"An incisive portrait of Theodore Hesburgh as the influential embodiment of one way of being Catholic and American in the last half of the twentieth century."—George Weigel, author of The End and the Beginning: Pope John Paul II - The Victory of Freedom, the Last Years, the Legacy

"In this ground-breaking, clear eyed biography of Father Theodore Hesburgh, we finally have the man in full.  With charity and historical candor, Father Wilson Miscamble takes readers inside the glories and contradictions of this renowned man of faith—caught between the world and Notre Dame. Through personal interviews with Hesburgh and careful reportage, Miscamble reveals the Hesbergh legacy from the inside, fearlessly exposing unexplored corners of Fr. Ted’s story that hold important lessons for anyone who cares about education, faith, and The University of Notre Dame."—Raymond Arroyo, New York Times Bestselling Author, Fox News Contributor, EWTN News Managing Editor

"Fr. Hesburgh was the most influential and remarkable man I have ever met. Reading American Priest helped me understand him better, both his struggles and his many accomplishments."—Coach Lou Holtz

"With the scholarly acumen of an accomplished historian and the personal commitment of a Holy Cross priest, Miscamble has crafted an important, critical re-telling of the life and work of Father Theodore Hesburgh, C.S.C. This is not hagiography, nor historical biography in the conventional sense. This is an extended conversation, at times a candid debate, concerning what both author and subject care about most: Notre Dame, Holy Cross, national and international politics, and how Catholic higher education can best fulfill its mission of serving the church and the world and thus giving glory to God."—Michael J. Baxter, Ph.D., Director of Catholic Studies at Regis University

"Ambitious . . . [Reverend] Miscamble skillfully guides us through the jungle of campus politics." —The Imaginative Conservative

▼▲
I'm the author/artist and I want to review American Priest: Ted Hesburgh and a Post-Christian Nation - eBook.
Back
Back