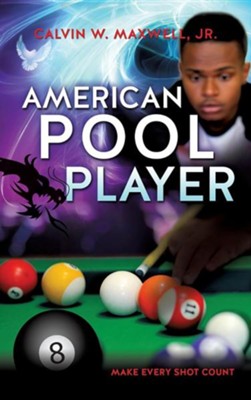 ▼▲
In American Pool Player, by Calvin W. Maxwell Jr., readers will follow Grice Grafton as he starts a new journey at Northside High School. . .it is September 1984. Grice thought he knew everything he needed to know to survive the world, as he was told years ago by his pool-playing mentor, Mr. Evans. Mr. Evans told Grice that, "Life is Pool", and he believed him. Grice learns more than he could imagine when his loyalty to his childhood pulls him into a pool match with a ruthless thug named Dragon. As Grice prepares for the match, his views on race relations; his perception of his longtime friend, Brenda; his relationship with his father; his faith; and even his dreams are tested. These first few days of high school will ruin his world. . . forever. Hardcover, 168 pages.

▼▲
In the early, hazy month of September 1984, Grice Grafton will begin a brand new odyssey at Northside High School. After learning to play pool as a youngster from his mentor Mr. Evans, Grice thought he knew everything he needed to know to survive in the world. 'Life is pool' according to his mentor and Grice believed him. At Northside, Grice would learn much more than he could ever imagine when he allows his loyalty to his one true childhood friend pull the mild mannered Grice into a pool match with a ruthless thug named Dragon, who will stop at nothing to win. The days leading up to the match will test Grice's views on race relations; his perception of his longtime friend, Brenda; his relationship with his father; his faith; and even his dreams. Grice's first few days of high school will shatter his world...forever.

▼▲
I'm the author/artist and I want to review American Pool Player.
Back