Skip to main content
SPRING CYBER EVENT STARTS NOW: And it's a really BIG deal! Up to 88% off through 5/24>
American Political Speeches
Edited By: Richard Beeman
By: Richard Beeman(Ed.)
Stock No: WW121951 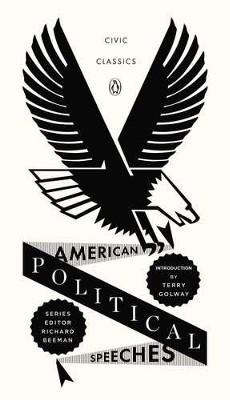 ▼▲
* Frederick Douglass captures the irony of Independence Day from a slave's perspective. Lincoln hails the birth of new freedom at Gettysburg. John Kennedy rails against the Communists at the Berlin Wall. Ronald Reagan bravely addresses Congress after surviving an assassination attempt. These and other classic speeches by American leaders moved a nation---and will inspire you, too! 176 pages, softcover from Penguin.

Penguin presents a series of six portable, accessible, and—above all—essential reads from American political history, selected by leading scholars. Series editor Richard Beeman, author of The Penguin Guide to the U.S. Constitution, draws together the great texts of American civic life to create a timely and informative mini-library of perennially vital issues. Whether readers are encountering these classic writings for the first time, or brushing up in anticipation of the 50th anniversary of the Civil Rights Act, these slim volumes will serve as a powerful and illuminating resource for scholars, students, and civic-minded citizens.

American Political Speeches includes the best American rhetoric from inside and outside the White House. Some of the greatest words spoken in American history have come from men and women who lacked the biggest bully pulpit in the country, but who nevertheless were able to move the nation with words. Frederick Douglass explained the irony of Independence Day from the perspective of a slave. Martin Luther King, Jr. described his dream of an interracial America. William Jennings Bryan gave voice to social discontent with a single phrase, "a cross of gold." Barbara Jordan summoned the nation"s outrage during the impeachment hearings against Richard Nixon. And the best presidents, not by coincidence, have tended to be those with an appreciation for the use of language: Lincoln explaining a new birth of freedom at Gettysburg; John Kennedy voicing moral outrage at the Berlin Wall; Franklin D. Roosevelt chatting to a nation gathered in front of radios; Ronald Reagan addressing Congress freshly healed from an assassination attempt.

▼▲
Terry Golway teaches U.S. history at Kean University in Union, N. J. His previous books include Washington's General, So Others Might Live, The Irish in America, For the Cause of Liberty, and Irish Rebel. He coauthored with Robert Dallek Let Every Nation Know: John F. Kennedy in His Own Words.

Richard Beeman, the John Welsh Centennial Professor of History Emeritus at the University of Pennsylvania, has previously served as the Chair of the Department of History, Associate Dean in Penn's School of Arts and Sciences, and Dean of the College of Arts of Sciences. He serves as a trustee of the National Constitution Center and on the center's executive committee. Author of seven previous books, among them The Penguin Guide to the United States Constitution and Plain Honest Men: The Making of the American Constitution, Professor Beeman has received numerous grants and awards including fellowships from the National Endowment for the Humanities, the Rockefeller Foundation, the Institute for Advanced Study at Princeton, and the Huntington Library. His biography of Patrick Henry was a finalist for the National Book Award.

▼▲
I'm the author/artist and I want to review American Political Speeches.
Back