Skip to main content
American Phoenix: John Quincy and Louisa Adams, the War of 1812, and the Exile that Saved American Independence - eBook
By: Jane Cook
Stock No: WW34811EB 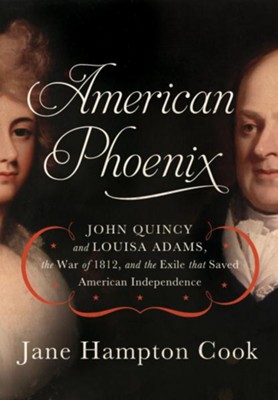 American Phoenix: John Quincy and Louisa Adams, the War of 1812, and the Exile that Saved American Independence - eBook

John Quincy and Louisa Adams’s unexpected journey that changed everything.

American Phoenix is the sweeping, riveting tale of a grand historic adventure across forbidding oceans and frozen tundra—from the bustling ports and towering birches of Boston to the remote reaches of pre-Soviet Russia, from an exile in arctic St. Petersburg to resurrection and reunion among the gardens of Paris. Upon these varied landscapes this Adams and his Eve must find a way to transform their banishment into America’s salvation.

Author, historian, and national media commentator Jane Hampton Cook breathes life into once-obscure history, weaving a meticulously researched biographical tapestry that reads like a gripping novel. With the arc and intrigue of Shakespearean drama in a Jane Austen era, American Phoenix is a timely yet timeless addition to the recent renaissance of works on the founding Adams family, from patriarchs John and Abigail to the second-generation of John Quincy and Louisa and beyond.

Cook has crafted not only a riveting narrative but also an easy-to-understand history filled with fly-on-the-wall vignettes from 1812 and its hardscrabble, freedom-hungry people. While unveiling vivid portrayals of each character—a colorful assortment of heroes and villains, patriots and pirates, rogues and rabble-rousers—she paints equally fresh, intimate portraits of both John Quincy and Louisa Adams. Cook artfully reveals John Quincy’s devastation after losing the job of his dreams, battle for America’s need to thrive economically, and sojourn to secure his homeland’s survival as a sovereign nation. She reserves her most detailed brushstrokes for the inner struggles of Louisa, using this quietly inspirational woman’s own words to amplify her fears, faith, and fortitude along a deeply personal, often heart-rending journey. Cook’s close-up perspective shows how this American couple’s Russian destination changed US destiny.

▼▲
I'm the author/artist and I want to review American Phoenix: John Quincy and Louisa Adams, the War of 1812, and the Exile that Saved American Independence - eBook.
Back
Back