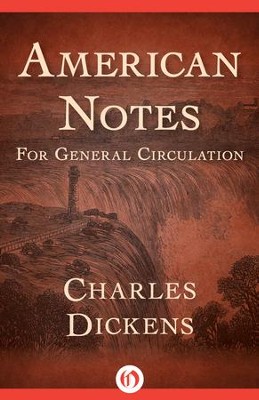 In January of 1842, Charles Dickens and his wife, Kate, traveled from Liverpool to Boston. At the time, Dickens had already attained a tremendous level of literary success and fame, and the author hoped his travels would help him gain insight into the New World that had captivated the English imagination. Over the ensuing 6 months, Dickens explored the East Coast and Great Lakes regions of the United States and Canada, observing life on the opposite side of the Atlantic from a distinctly British viewpoint.

By turns humorous, critical, witty, and incisive, this travelogue is a unique and keen look at 19th-century North America.

▼▲
An international celebrity during his lifetime, Charles Dickens (1812&shy;–1870) is widely regarded as the greatest novelist of the Victorian era. His classic works include A Christmas Carol, Oliver Twist, David Copperfield, Great Expectations, and A Tale of Two Cities, one of the bestselling novels of all time. When Dickens was twelve years old, his father was sent to debtors’ prison, and the boy was forced to work in a boot-blacking factory to support his family. The experience greatly shaped both his fiction and his tireless advocacy for children’s rights and social reform.

▼▲
I'm the author/artist and I want to review American Notes: For General Circulation - eBook.
Back
×
Back
×