Skip to main content
SPRING CYBER EVENT STARTS NOW: And it's a really BIG deal! Up to 88% off through 5/24>
American Notes
Edited By: Patricia Ingham
By: Charles Dickens
Stock No: WW43649X 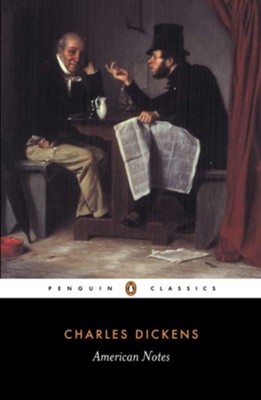 When Charles Dickens set out for America in 1842 he was the most famous man of his day to travel there - curious about the revolutionary new civilization that had captured the English imagination. His frank and often humorous descriptions cover everything from his comically wretched sea voyage to his sheer astonishment at the magnificence of the Niagara Falls, while he also visited hospitals, prisons and law courts and found them exemplary. But Dickens's opinion of America as a land ruled by money, built on slavery, with a corrupt press and unsavoury manners, provoked a hostile reaction on both sides of the Atlantic. American Notes is an illuminating account of a great writer's revelatory encounter with the New World. In her introduction, Patricia Ingham examines the response the book received when it was published, and compares it with similar travel writings of the period and with Dickens's fiction, in particular Martin Chuzzlewit. This edition includes an updated chronology, appendices and notes.

▼▲
Charles Dickens was born on February 7, 1812, in Landport, Portsea, England. He died in Kent on June 9, 1870. The second of eight children of a family continually plagued by debt, the young Dickens came to know not only hunger and privation,but also the horror of the infamous debtors’ prison and the evils of child labor. A turn of fortune in the shape of a legacy brought release from the nightmare of prison and "slave" factories and afforded Dickens the opportunity of two years’ formal schooling at Wellington House Academy. He worked as an attorney’s clerk and newspaper reporter until his Sketches by Boz (1836) and The Pickwick Papers (1837) brought him the amazing and instant success that was to be his for the remainder of his life. In later years, the pressure of serial writing, editorial duties, lectures, and social commitments led to his separation from Catherine Hogarth after twenty-three years of marriage. It also hastened his death at the age of fifty-eight, when he was characteristically engaged in a multitude of work.

Patricia Ingham is Senior Research Fellow and Reader at St Anne's College, Oxford. She has written on the Victorian novel and on Hardy in particular. she is the General Editor of all Hardy's fiction in the Penguin Classics and has edited Gaskell's North and South for the series.

▼▲
I'm the author/artist and I want to review American Notes.
Back