Skip to main content
American Poetry: The Nineteenth Century: The Library of America Anthology
By: John Hollander
Stock No: WW535655 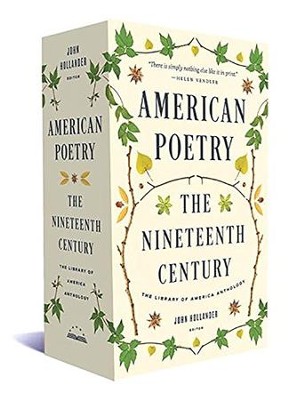 American Poetry: The Nineteenth Century: The Library of America Anthology

▼▲
At last in a deluxe collector's edition boxed set, the most complete and authoritative anthology of 19th century American poetry ever published

From the lyrics of Walt Whitman and Emily Dickinson to folk ballads and moving spirituals, one of our nation's greatest cultural legacies is the distinctly American poetry that arose during the nineteenth century. Unprecedented in its comprehensive sweep and textual authority, and now presented for the first time in a deluxe two-volume boxed set, the Library of America's acclaimed anthology American Poetry: The Nineteenth Century reveals for the first time the full beauty and diversity of that tradition. The century's greatest poets are here in generous selections: Dickinson, Poe, Emerson, Melville, and Whitman. Alongside are the now-undervalued achievements of Whittier, Longfellow, Bryant, Lowell, and Holmes, as well as poems just finding full recognition: mystical sonnets by Jones Very, the Romantic fantasias of Maria Gowen Brooks, the modernist stirrings of Stephen Crane. Also here are American Indian poetry in nineteenth-century versions, a rich gathering of anonymous folk songs, and popular spirituals and hymns, like "Battle Hymn of the Republic" and "It Came Upon the Midnight Clear." The anthology includes a newly researched biographical sketch of each poet and a year-by-year chronology of poets and poems from 1800 to 1900.

LIBRARY OF AMERICA is an independent nonprofit cultural organization founded in 1979 to preserve our nation’s literary heritage by publishing, and keeping permanently in print, America’s best and most significant writing. The Library of America series includes more than 300 volumes to date, authoritative editions that average 1,000 pages in length, feature cloth covers, sewn bindings, and ribbon markers, and are printed on premium acid-free paper that will last for centuries.

▼▲
John Hollander (1929-2013), editor, was a distinguished poet, critic, and teacher whose many collections included The Night Mirror (1971), Reflections on Espionage (1976), Spectral Emanations (1978), and Powers of Thirteen (1983). He was a MacArthur Fellow and was awarded the Bollingen Prize in 1983. He also edited two volumes in the Library of America's American Poets Project series: American Wits: An Anthology of Light Verse (2003) and Emma Lazarus: Selected Poems (2005).

▼▲
"There is simply nothing else like it in print." -- Helen Vendler

▼▲
I'm the author/artist and I want to review American Poetry: The Nineteenth Century: The Library of America Anthology.
Back