Skip to main content
SPRING CYBER EVENT STARTS NOW: And it's a really BIG deal! Up to 88% off through 5/24>
American Military History: A Very Short Introduction
By: Joseph T. Glatthaar
Stock No: WW859252 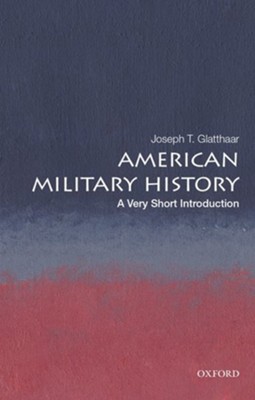 ▼▲
Since the first English settlers landed at Jamestown with the legacy of centuries of European warfare in tow, the military has been an omnipresent part of America. In American Military History: A Very Short Introduction, Joseph T. Glatthaar explores this relationship from its origins in the
thirteen colonies to today's ongoing conflicts in the Middle East.

During the Revolutionary War, tension grew between local militias and a standing army. The Founding Fathers attempted to strike a balance, enshrining an army, navy, and a "well-regulated Militia" in the Constitution. The US soon witnessed the rise of a professional military, a boon to its successes
in the War of 1812, the Mexican War, and the Civil War. However, after the Civil War, the US struggled to learn that the purpose of a peacetime army is to prepare for war.

When war did arrive, it arrived with a vengeance, gutting the trenches of the Great War with effective innovations: tanks, planes, machine guns, and poison gas. The US embraced the technology that would win both world wars and change the nature of battle in the Second World War. The US emerged from
World War II as the most powerful nation in the war, but over the next several decades it was forced to confront the limits of its power. The nuclear era brought encounters defined by stalemate--from the Cold War conflicts of Korea and Vietnam to the wars in Afghanistan and Iraq. Since 9/11, the US
has been frustrated by unconventional warfare, including terrorism and cyberwar, largely negating the technological advantage it had held. Glatthaar examines all these challenges, looking to the future of the U.S. military and its often proud and complicated legacy.

▼▲
Joseph T. Glatthaar is the Stephenson Distinguished Professor of History at the University of North Carolina-Chapel Hill. He received his PhD in History at the University of Wisconsin-Madison. Glatthaar has written eight books, numerous articles, and received sundry prizes, including the Samuel
Eliot Morison Prize for lifetime achievement from the Society for Military History. A past President of the Society for Military History, he has taught at the U.S. Army Command and General Staff College, the U.S. Army War College, U.S. Military Academy at West Point, and the University of Houston.

▼▲
I'm the author/artist and I want to review American Military History: A Very Short Introduction.
Back