Skip to main content
SPRING CYBER EVENT STARTS NOW: And it's a really BIG deal! Up to 88% off through 5/24>
American Coup: Martial Life and the Invisible Sabotage of the Constitution - eBook
By: William M. Arkin
Stock No: WW37520EB 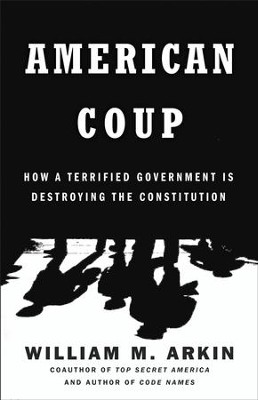 American Coup: Martial Life and the Invisible Sabotage of the Constitution - eBook

▼▲
A stunning exploration of the subtle erosion of freedom in an age of concocted fear and de facto military authority.

When we think of a military coup, the first image that comes to mind is a general, standing at a podium with a flag behind him, declaring the deposing of elected leaders and the institution of martial law.

Think again. In American Coup, William Arkin reveals the desk-bound takeover of the highest reaches of government by a coterie of "grey men" of the national security establishment. Operating between the lines of the Constitution, this powerful and unelected group fights to save the nation from "terror" and weapons of mass destruction while at the same time modifying and undermining the very essence of the country. Many books are written about secrecy, surveillance, and government law-breaking; none so powerfully expose the truth of everyday life in this state of war.

▼▲
William Arkin is one of America's premier military experts, having served in Army intelligence in West Berlin during the Cold War. Since then, he has written more than a dozen books, briefed hundreds of top military, intelligence and government officials, and been a part of countless exposés. Working for the Washington Post, he conceived and co-authored the landmark "Top Secret America" investigation, and co-wrote the national bestseller of the same name with colleague Dana Priest. He lives in Vermont.

▼▲
I'm the author/artist and I want to review American Coup: Martial Life and the Invisible Sabotage of the Constitution - eBook.
Back
Back