Skip to main content
SPRING CYBER EVENT STARTS NOW: And it's a really BIG deal! Up to 88% off through 5/24>
American Indian Autobiography
By: H. David Brumble III
Stock No: WW217492 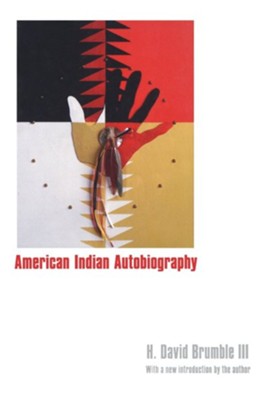 ▼▲
American Indian Autobiography is a kind of cultural kaleidoscope whose narratives come to us from a wide range of American Indians: warriors, farmers, Christian converts, rebels and assimilationists, peyotists, shamans, hunters, Sun Dancers, artists and Hollywood Indians, spiritualists, visionaries, mothers, fathers, and English professors. Many of these narratives are as-told-to autobiographies, and those who labored to set them down in writing are nearly as diverse as their subjects. Black Elk had a poet for his amanuensis; Maxidiwiac, a Hidatsa farmer who worked her fields with a bone-blade hoe, had an anthropologist. Two Leggings, the man who led the last Crow war party, speaks to us through a merchant from Bismarck, North Dakota. White Horse Eagle, an aged Osage, told his story to a Nazi historian.
By discussing these remarkable narratives from a historical perspective, H. David Brumble III reveals how the various editors’ assumptions and methods influenced the autobiographies as well as the autobiographers. Brumble also—and perhaps most importantly—describes the various oral autobiographical traditions of the Indians themselves, including those of N. Scott Momaday and Leslie Marmon Silko. American Indian Autobiography includes an extensive bibliography; this Bison Books edition features a new introduction by the author.

▼▲
H. David Brumble III is a professor of English and religious studies at the University of Pittsburgh and is the author of several books, including, most recently, Classical Myths and Legends in the Middle Ages and Renaissance.

▼▲
“Students and specialists alike, in Native American literature or history, or in the field of autobiography, will derive much value from Brumble’s lucid and penetrating study, and the annotated list he provides of the many autobiographies mentioned in the book will prove a helpful and stimulating guide to further research.”—Bernard A. Hirsch, University of Kansas

“This book on the nature and value of American Indian autobiographies is as fascinating as it is informative.”—Mary Ellison, Journal of American Studies

▼▲
I'm the author/artist and I want to review American Indian Autobiography.
Back